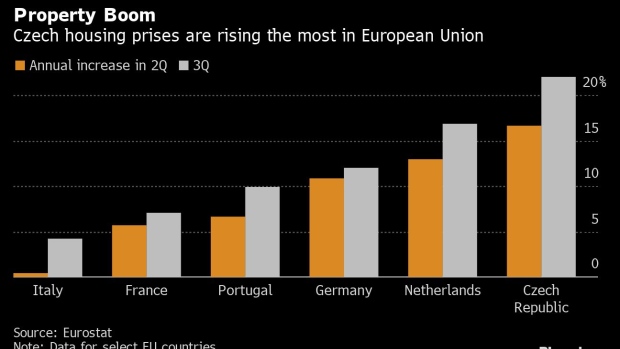 (Bloomberg) -- Real estate prices in the Czech Republic are rising at the fastest pace in the European Union and have become one of the key reasons behind aggressive increases in borrowing costs.

Annual growth in Czech house costs accelerated to 22% in the third quarter, from 17% in the previous three months, well above the EU average of 9%, Eurostat data showed on Friday. Property prices are one of the biggest drivers of overall inflation, which the central bank expects to hit the highest level in two decades this month.

After lifting interest rates by a cumulative 3.5 percentage points over six months, the central bank has pledged more monetary-policy tightening is to come to tame inflation. Several policy makers have said the benchmark rate may rise near 5%, from current 3.75%, in the first quarter.

Rising borrowing costs and stricter rules for mortgage lending could slow the demand among locals, but purchases by foreign investors who are building property portfolios will probably prevent a market correction, according to Petr Dufek, an economist at the Czech unit of KBC Group NV.

“Therefore a further increase in prices, albeit significantly slower, looks likely this year,” he said.