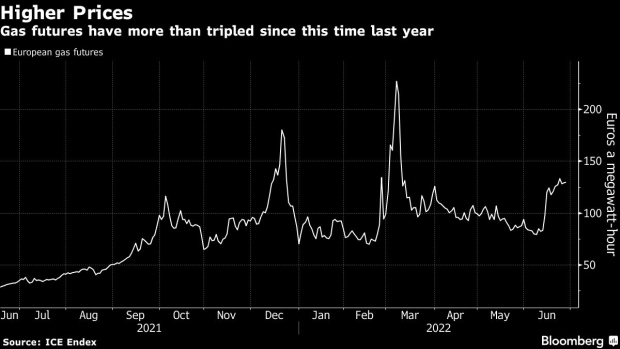 (Bloomberg) -- Europe will need to cut as much as 30% of its gas consumption by mid-February if flows from Russia are halted.

Widespread curtailments would be necessary if Moscow decides to halt flows completely, according to Fatih Birol, executive director of the International Energy Agency. It’s a scenario that leaders should be preparing for, he said in response to emailed questions.

Europe is trying to shore up supplies of gas to put into storage ahead of winter. This is looking more challenging after Moscow earlier this month cut flows through the Nord Stream pipeline to Germany by 60%, citing technical issues. The EU’s gas supply situation could worsen if Russia completely halts gas to the region in the coming weeks. The bloc’s projections show that while storage filling rates are currently on track to hit 90% by Nov. 1, a cut-off would bring that level to below 75%.

This would mean “significantly higher” gas prices, according to Birol. Benchmark European gas futures have already more than tripled since this time last year, according to ICE Endex data.

Europe should focus on cutting gas use from industry and households now to ensure as much supply as possible is going into storage, Birol said.

Germany, Europe’s biggest economy, is figuring out ways to incentivize industry to use less. The nation plans to introduce an auction system that will begin this summer to pay industrial gas consumers to save the fuel. Governments in Berlin and Copenhagen are encouraging people to use less at home by taking shorter showers.