Grim day for pipelines shows they're almost impossible to build

To be an energy superpower, U.S. oil and natural gas requires a suitably gargantuan pipeline network that stretches for millions of miles. The country’s ability to expand that infrastructure is being tested like never before.

In the span of less than 24 hours, a court ordered the Dakota Access crude oil pipeline to shut down and the developers of the Atlantic Coast gas conduit said they were canceling the project. It was a deluge of bad news for an industry that’s increasingly finding that the mega-projects of the past are no longer feasible in the face of unprecedented opposition to fossil fuels and the infrastructure that supports them.

Armed with experienced lawyers and record funding, environmental groups are finding enormous success blocking key pipeline permits in court. The challenges come despite support from President Donald Trump, who so far has failed to ensure big projects like Keystone XL get built.

“I would expect this to be a turning point for new investment,” said Katie Bays, co-founder of Washington-based Sandhill Strategy LLC. “There is real investor fatigue around this parade of legal and regulatory headwinds to energy projects.” 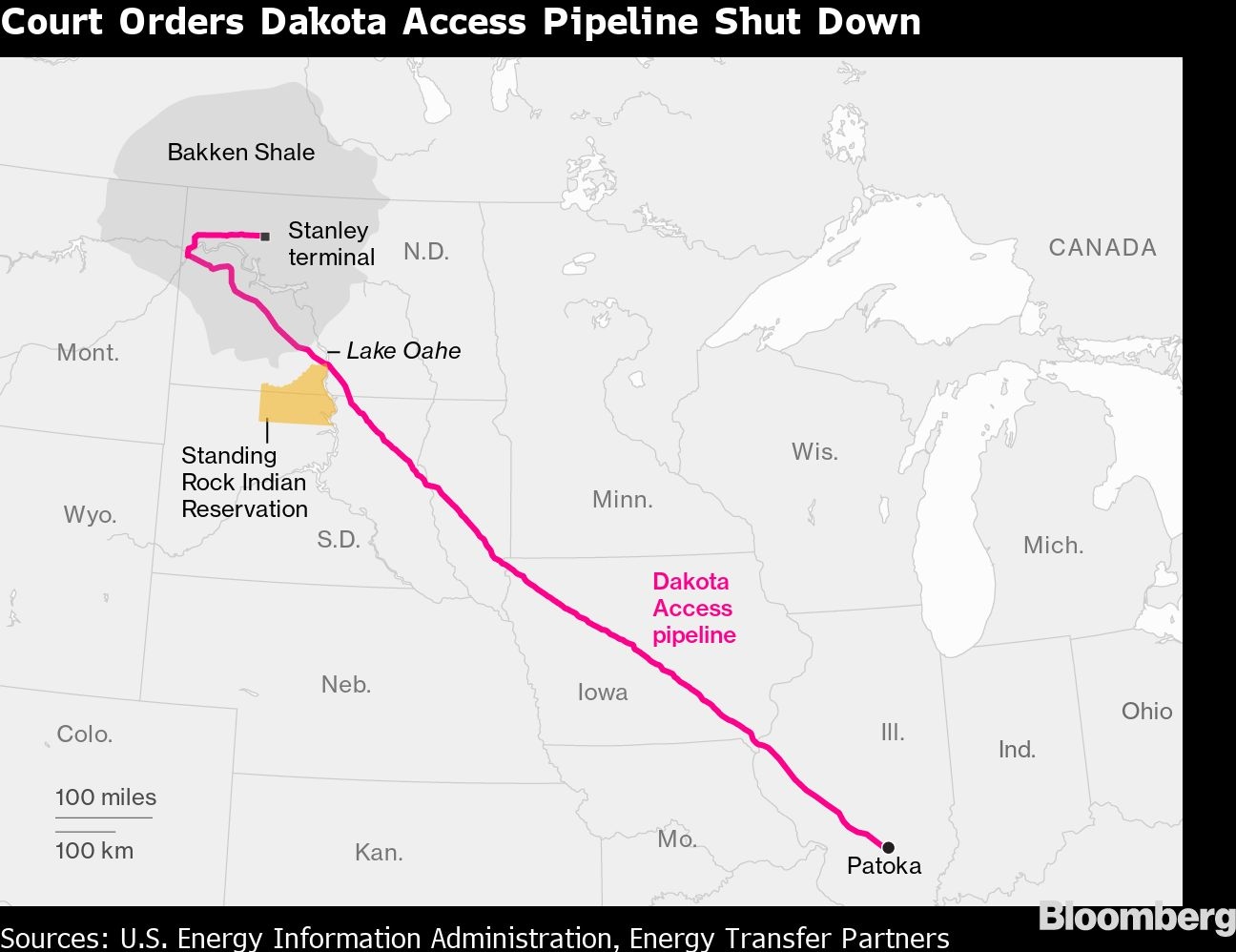 Dominion Energy Inc. and its partner Duke Energy Corp. said Sunday they’ll no longer pursue their US$8-billion Atlantic Coast natural gas pipeline after years of delays and ballooning costs, becoming the third such project this year to be sidelined or canceled altogether amid mounting opposition to development of oil and gas.

Then on Monday, a U.S. district court ordered Energy Transfer LP’s Dakota Access crude oil pipeline to shut down by Aug. 5. It ruled that a crucial federal permit for the project fell too far short of National Environmental Policy Act requirements to allow the pipeline to continue operating while regulators conduct a broader analysis ordered in a previous decision.

The keep-it-in-the-ground movement has increasingly turned its attention to the pipes, rather than the wells themselves, because they require various federal and state permits, which, for the most part, can be more easily litigated.

Trump has attempted to insulate the industry from those efforts. In his first week in office, he paved the way for Dakota Access and the contentious Keystone XL oil pipeline. Last year, the White House signed an executive order aimed at short-circuiting regulators who held up gas lines by refusing permits.

In contrast to Trump, presumptive Democratic presidential nominee Joe Biden has vowed to kill Keystone XL and is supporting a push to lower-carbon energy sources, even if it comes at the expense of oil and gas jobs.

“The Dakota Access and Atlantic Coast pipes encapsulate the last few years of a trend we’ve watched: the dramatic expansion of using regulatory obligations to hurt infrastructure projects in the courts,” said Brandon Barnes, an analyst at Bloomberg Intelligence.

When Atlantic Coast was proposed in 2014, it was expected to cost US$5 billion and connect Appalachian shale gas plays with markets in the southeast. The price tag rose to US$8 billion as the pipeline’s date to enter service was pushed back over and over again.

In the end, not only did Dominion cancel it, the company also announced Sunday the sale of almost all its gas pipeline and storage business to Warren Buffett’s Berkshire Hathaway Inc. for US$4 billion, while highlighting its target of net zero carbon emissions by 2050.

Environmental groups heralded the Atlantic Coast cancellation and the court’s decision to shut down Dakota Access, while industry groups blamed these latest blows on litigious activists.

The American Petroleum Institute said in a statement that it’s “deeply troubled” by the Atlantic Coast cancellation and Dakota Access shutdown. “The need to reform our broken permitting system has never been more urgent,” the industry group said.

Oil producers Continental Resources Inc. and Hess Corp., both of which have significant operations in the Bakken shale field of North Dakota, saw their shares fall Monday morning following the Dakota Access shutdown order. And a lack of new pipelines in the U.S. Northeast, which faces gas supply constraints, may hobble Appalachian producers and potentially hasten the pace of transition to renewable energy.

The Dakota Access ruling marks the first time a court has shut down a major, in-service pipeline for environmental concerns, Southern Methodist University energy law professor James W. Coleman said. The decision upends conventional wisdom that judges would always preserve the status quo by keeping projects in service, and will spur pipeline opponents to look for opportunities to shut down other existing projects, he said.

Even in Texas, long considered a safe haven for the oil and gas industry, Kinder Morgan Inc.’s Permian Highway Pipeline is experiencing a backlash from landowners and conservationists who argue the project would harm aquifer recharge zones.

--With assistance from Naureen S. Malik and Alex Tribou.