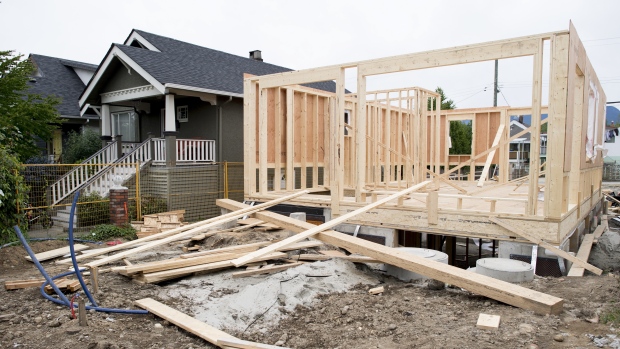 OTTAWA -- The pace of new housing starts in August climbed 1.9 per cent compared with July as the housing market rebounded from its recent slowdown.

Canada Mortgage and Housing Corp. said Tuesday the seasonally adjusted annual rate of housing starts rose to 226,639 units in August, up from 222,467 units in July.

Economists on average had expected an annual pace of 215,000, according to financial markets data firm Refinitiv, while the six-month moving average increased to 218,998 in August compared with 208,931 in July.

"August was yet another strong month for new construction, with broad-based gains registered across nearly all provinces," TD Bank economist Rishi Sondhi wrote in a report.

The housing market cooled last year in the wake of tighter mortgage qualification rules and a rise in mortgage rates.

However, housing has started to regain strength this year as offers from lenders for fixed-rate mortgages have moved lower.

The increase in the annual pace of housing starts in August came as the pace of urban starts increased two per cent in August to 213,663 units.

Rural starts were estimated at a seasonally adjusted annual rate of 12,976 units.

In a separate release, Statistics Canada said Tuesday that the value of building permits issued by Canadian municipalities rose three per cent to $8.3 billion in July, the latest numbers available.