Deals among cashed-up mining companies are poised to pick up once lingering uncertainties from the pandemic dissipate, according to the most-active investment bank in the industry.

Miners are flush with cash and ready to expand through acquisitions, with resurgent demand and supply shortfalls driving up metals prices and company earnings to levels not seen for a decade, according to global metals and mining group co-heads Ilan Bahar and Jamie Rogers of BMO Capital Markets, which is hosting one of the world’s largest mining conferences this week.

“History has shown that when there’s positive momentum in commodity prices that tends to drive M&A activity,” Bahar said in an interview ahead of the gathering. “As the world opens up -- if the commodity price remains strong -- we expect M&A to follow.”

The deal-making environment is among this week’s topics at the 30th annual global metal and mining conference, which is being held virtually due to ongoing travel restrictions and risks associated with the pandemic. Such COVID-19 issues have already constrained mergers-and-acquisition activity in the past year, even though Bank of Montreal’s investment bank sees plenty of discussions happening. 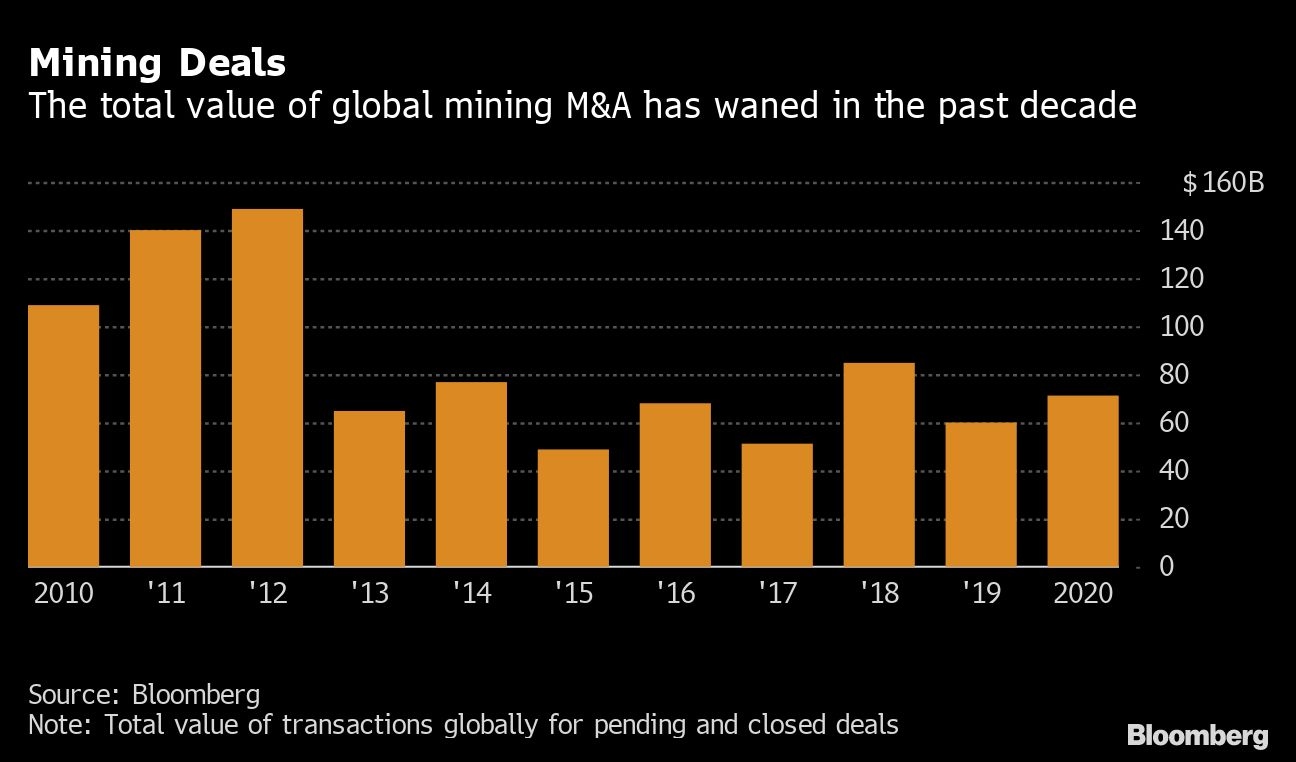 “It feels pretty busy,” Rogers said in the interview, while noting “there’s still that stumbling block of boards and directors trying to get over the hurdle of ‘How can I step out and make a big acquisition without putting boots on the ground?’”

Pent-up demand for acquisitions should start to be realized as the world opens up assuming buoyant commodity prices hold up, the co-heads said of the five-day virtual gathering that has attracted a record number of equity investors and presenting companies.

“If it weren’t for the travel restrictions associated with COVID -- with this commodity price environment, with this momentum -- we would have seen much more M&A,” Bahar said.

The pace and type of deal-making varies by sector, according to the bankers, whose firm advised on 118 takeovers in the past decade and ranks among the top-10 based on total deal value and market share, according to data compiled by Bloomberg.

In gold, which saw a wave of large takeovers in 2019, producers are expected to buy more exploration and development companies to shore up future supply, with shareholders keen to see more consolidation.

Among companies involved in industrial metals like copper and nickel, there are fewer players to consolidate. The main decision facing executives and directors is whether to spend the windfall on stepping up development of their own pipeline of projects or to go after complementary assets of other companies.

“That’s a real dynamic we’re seeing right now,” Rogers said. “Many of the largest players are awash in cash because of metal prices and they look and say ‘OK, do I look outside or inside for my best returns?’”

For now, the answer leans toward the latter, according to Rogers. Battery metals like copper have rallied so much that prices are reaching levels that might encourage companies to build rather than buy, especially as share values soar.