The 3-month government bill yields about 1.68 per cent, compared with 1.67 per cent for the 10-year note, according to data compiled by Bloomberg. An inverted government yield curve is seen by some economists as a signal of a looming recession. The curve inverted in late March for the first time since 2007, before returning to normal on April 3.

Policy makers in Ottawa led by Governor Poloz left their benchmark overnight rate unchanged at 1.75 per cent for a fourth straight decision Wednesday, and dropped a reference to future increases that had been in every rate statement since the end of 2017.

The bank mentioned a series of factors -- from slower global growth to sluggish housing and oil sectors -- that brought Canada’s economy to a near halt over the past six months. It also laid out a more dour growth forecast for this year than economists are expecting. 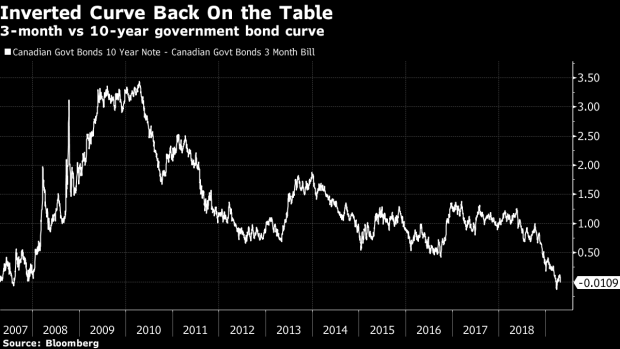 The bulk of Canada’s yield curve remains normal, with most long-term rates higher than short-term ones. There is a 16 basis-point gap between two- and 10-year bonds. The U.S. also has an inverted curve, when comparing three-month and 10-year notes.

The loonie declined after the dovish rate announcement, dipping close to a four-month low before paring losses. The currency traded at $1.3460 per U.S. dollar at 11:51 a.m. One dollar buys about 74 U.S. cents. Canadian Imperial Bank of Commerce advised clients to bet on further declines in the Canadian dollar.

--With assistance from Theophilos Argitis.