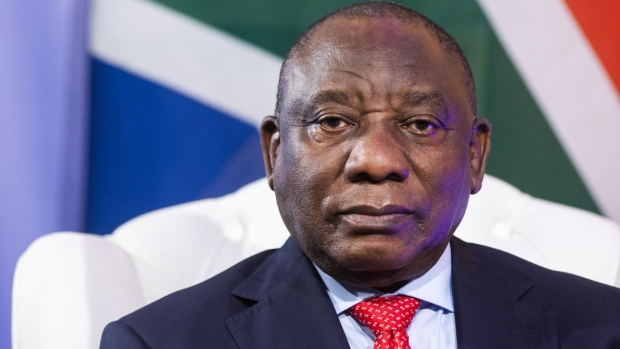 Cyril Ramaphosa waves to supporters as he departs an ANC meeting in Johannesburg, on Dec. 5. , Photographer: Leon Sadiki/Bloomberg

(Bloomberg) -- South Africa’s governing party said it will instruct its lawmakers to reject an independent panel’s report that President Cyril Ramaphosa may be guilty of violating the constitution, after he approached the nation’s top court to set the damning findings aside.

The African National Congress’s National Executive Committee resolved that its parliamentary caucus should vote against adopting the panel’s report “given that the president has taken it on review,” Paul Mashatile, the party’s treasurer-general, told reporters on Monday. Ramaphosa hasn’t offered to quit and the party hasn’t taken a decision that he should, he said.

Ramaphosa has been fighting for his political life since Nov. 30, when the panel headed by Sandile Ngcobo, a former chief justice, issued its assessment of the president’s handling of the theft of at least $580,000 at his game farm in 2020. It disputed Ramaphosa’s assertions that the cash came from the sale of 20 buffalo to a Sudanese national, that his farm manager had stashed it in a couch, and that he’d done nothing wrong.

While Ramaphosa initially contemplated resigning, he backtracked over the weekend, and his spokesman said he’ll seek a second term as ANC leader when it holds its five-yearly elective conference next week. Earlier on Monday, his lawyers petitioned the Constitutional Court to set aside the panel’s report on the basis that it exceeded its power and mandate, misjudged information and based its finding on hearsay evidence. A court date has yet to be set.

“I think we all anticipated that outcome — the ANC backing him in taking the process on review at the Constitutional Court and that was all in the price this morning already — this is just confirming what the market expected,” said Sollie van der Linde, fixed-income portfolio manager at Matrix Fund Managers.

Pierre de Vos and Richard Calland, who are law professors at the University of Cape Town, have both written that the president has a chance of winning his Constitutional Court case. Members of the National Assembly were scheduled to discuss the panel’s report on Tuesday, but the legislature’s programing committee agreed on Monday night to postpone the debate until Dec. 13.

Ramaphosa’s troubles began in June, when Arthur Fraser, the nation’s former chief spy, laid charges against him, alleging that he tried to cover up the theft of at least $4 million from his farm in the northern Limpopo province. The source and accuracy of that information remains unclear. Opposition parties climbed in, questioning whether the president had broken foreign-exchange and tax rules.

Ramaphosa won’t necessarily be off the hook if he escapes parliamentary censure. The police are also investigating the matter, and under ANC rules he’ll have resign if he’s criminally charged. The party’s integrity committee is meanwhile conducting its own investigation and could recommend that he should vacate his office.

A former labor-union leader and one of the wealthiest Black South Africans, Ramaphosa succeeded Jacob Zuma in early 2018 and pledged to tackle the corruption and economic malaise that set in during his successor’s nine-year rule.

While the scandal adds risks to South Africa’s policy outlook, broad continuity is the most likely scenario, even if Ramaphosa were to resign, according to Fitch Ratings.

“We believe that it is more likely that a potential successor would emerge from the president’s moderate wing of the ANC,” the ratings company said in statement on Monday. However, if the government responds to the scandal by raising public spending beyond expectations, this could lead to new downward pressure on South Africa’s debt assessment, it said.

--With assistance from Rene Vollgraaff and Monique Vanek.

(Updates rand, bond yields in fifth paragraph. An earlier version of this story was corrected to remove quotation marks and add attribution to the final sentence.)