The main theme on today's Fed meeting could be the dot plot rather than tapering: Liz Miller

What would it take to knock the U.S. recovery off course and send Federal Reserve policy makers back to the drawing board? Not much — and there are plenty of candidates to deliver the blow.

From one direction: U.S. debt-ceiling deadlock, China property slump or simply an extension of Covid caution could hit growth and jobs — taking the Fed’s proposed taper of bond purchases off autopilot, and pushing its first interest-rate increase back to 2024 or later. From the other: Sustained supply-chain snarl-ups could keep inflation stubbornly high and unmoor inflation expectations — forcing an acceleration of the taper, and an early rate liftoff in 2022.

And if shocks arrive from both directions at once, the upshot could be a combination of weak growth and rapidly rising prices — not as severe as the stagflation of the 1970s — but still leaving Fed Chair Jerome Powell and his colleagues with no easy answers.

In the following, we use Bloomberg Economics’ new modeling tool SHOK <GO> to explore these scenarios. None of them represents our base case. At a moment of elevated uncertainty, it makes sense to pay more attention to the risks.

Signs of a slowdown in the U.S. economy aren’t hard to find.

August payrolls — just 235,000 new jobs, one-third of the expected number — were a red flag. The delta variant has made consumers cautious again. The University of Michigan’s index of sentiment plunged in August; only six declines since the modern index was launched in 1978 have been bigger.

Add all these pieces together, and a recovery that looked unstoppable just a few weeks ago now appears to be losing steam. At Bloomberg Economics, we have cut our prediction for annualized third-quarter growth to 5 per cent, from above 7 per cent at the start of the quarter. Others have gone lower, with forecasters at some of the big banks anticipating growth closer to 3 per cent. Even if delta subsides, it’s not hard to imagine scenarios where the slide continues. 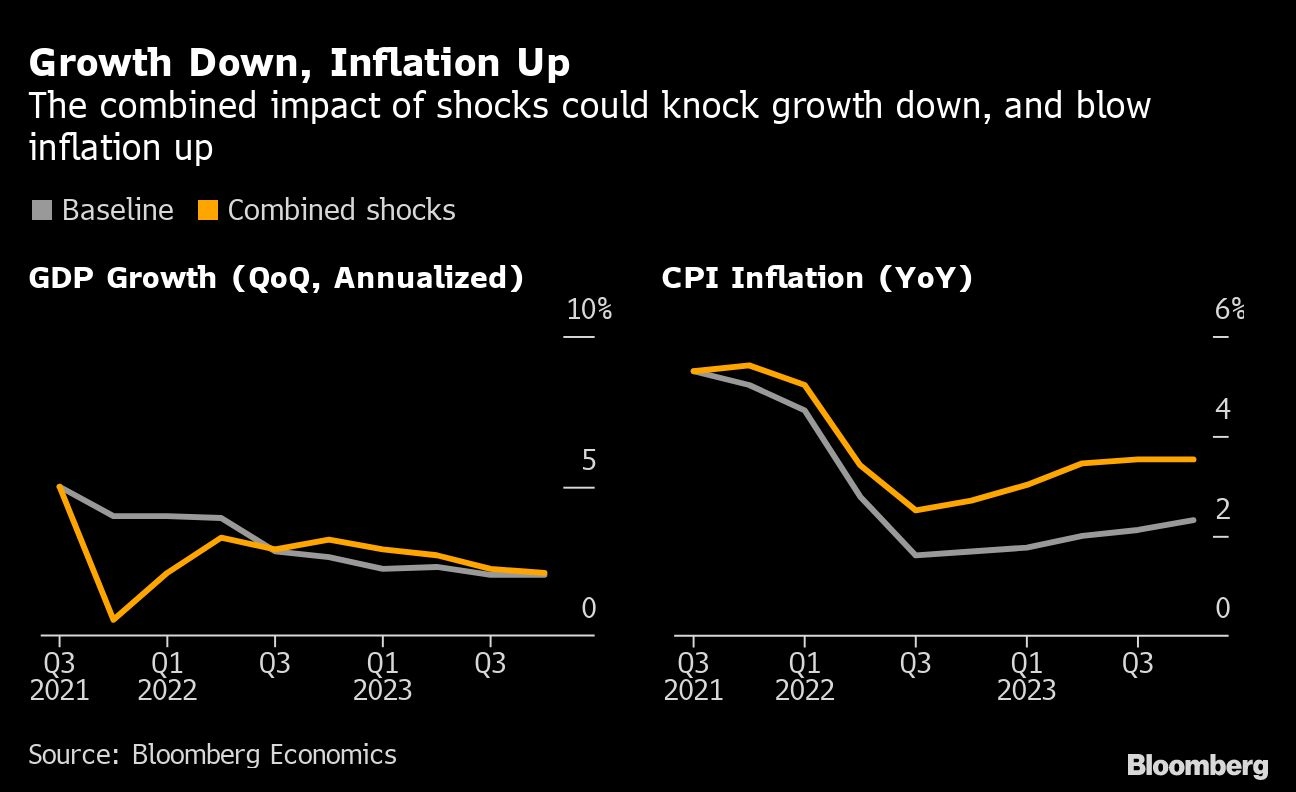 One of them involves the partisan impasse over raising the U.S. debt ceiling. The U.S. government is expected to reach the limits of its debt-servicing capacity in October. Default, a potentially catastrophic event for the global financial system, still appears an outside possibility. But even without one, recent history shows that dancing around the possibility — triggering a persistent risk-off period in the markets — can have serious consequences. Separately, a government shutdown starting Oct. 1 would hardly be helpful when the recovery is already struggling to find its footing.

In the three weeks around the 2011 debt-ceiling standoff, the S&P 500 index plummeted more than 15 per cent and corporate borrowing costs spiked. Using SHOK <GO> we estimate that a repeat performance would shave about 1.5 percentage points off annualized fourth-quarter growth — and ensure a rocky start to 2022. 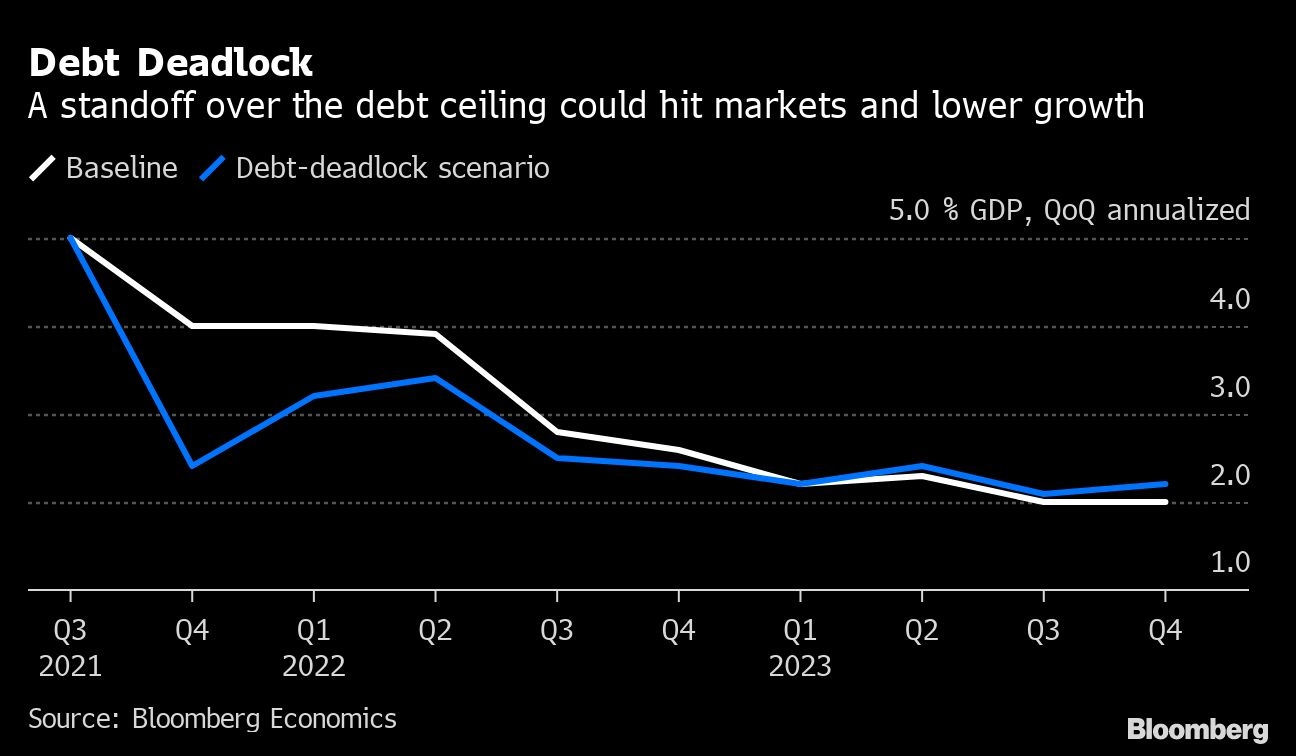 Not all the risks originate so close to home.

Regulators are cracking down on abuses that inflated property values, and tight controls on lending have helped push prices and new construction sharply down. That’s left Evergrande, one of the nation’s biggest developers, on the cusp of a default. The consequences of a wider slump could be severe, because real estate drives demand for everything from steel and concrete to furniture and home electronics — contributing as much as 29 per cent of China’s GDP, all told.

It wouldn’t take a sub-prime style meltdown to send shockwaves around the world and move the dial for the U.S. China’s economy is currently forecast to enter 2022 with growth at around 5 per cent. A property slump could take that down to 3 per cent, triggering a blow to trade partners, a drop in oil and metal prices, and a risk-off moment in global markets. In that scenario, the U.S. would limp into 2022 with the recovery marked down and inflation back below the 2 per cent target. 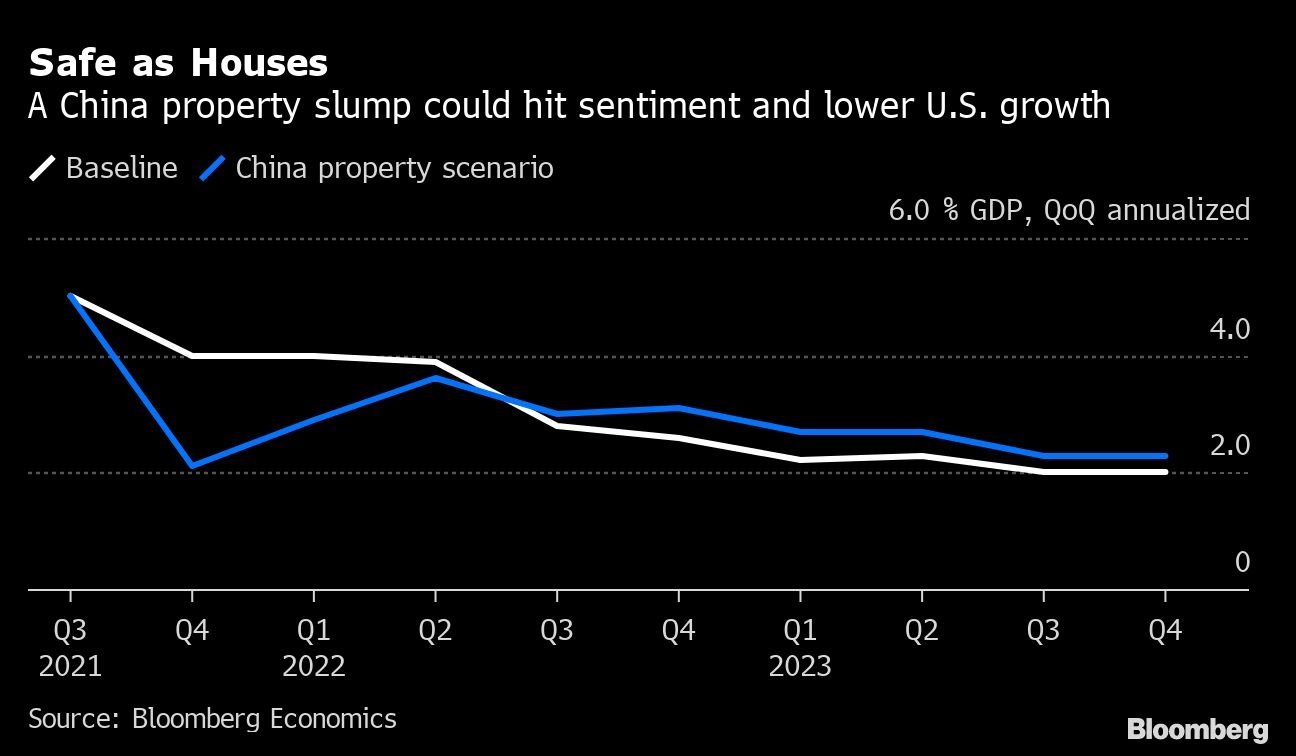 Powell has set out the FOMC’s criteria for rates liftoff: maximum employment, and inflation that hits and is set to exceed the 2 per cent target for some time. A blow to employment and demand from a debt-ceiling standoff or China shock might mean those criteria are not met. Rate hikes could be kicked into the long grass, with expectations moving from 2023 out to 2024 or beyond. The test for tapering is less stringent, and a start at the end of this year appears close to baked in. Even so, if the recovery stumbles the Fed might have to make a course correction, introducing discretion into a process that markets expect to run on autopilot.

In 2015, the stock-market and currency slump in China — and the sustained shift to global risk-off sentiment that triggered — was enough to delay the start and slow the pace of the U.S. tightening cycle. In 2021, the Fed might not have that luxury.

Supply-chain breakdowns — from port closures to shortages of semiconductors and lumber — have been one of the main factors pushing U.S. inflation above 5 per cent this summer. That’s enabled Powell to label the price jumps as “transitory” and soothe fears of an upward spiral. The lower CPI reading for August provides some support for that thesis.

It wouldn’t take much, though, for further supply shocks to keep inflation uncomfortably high.

From home electronics to textiles, American consumers load their shopping carts with goods that are made in Asia and delivered via supply chains that crisscross the continent. When the inflation rate for used cars in the U.S. hit 45 per cent this year, driven by semiconductor shortages that threw assembly lines into disarray, it illustrated what can happen when those fragile linkages break down. 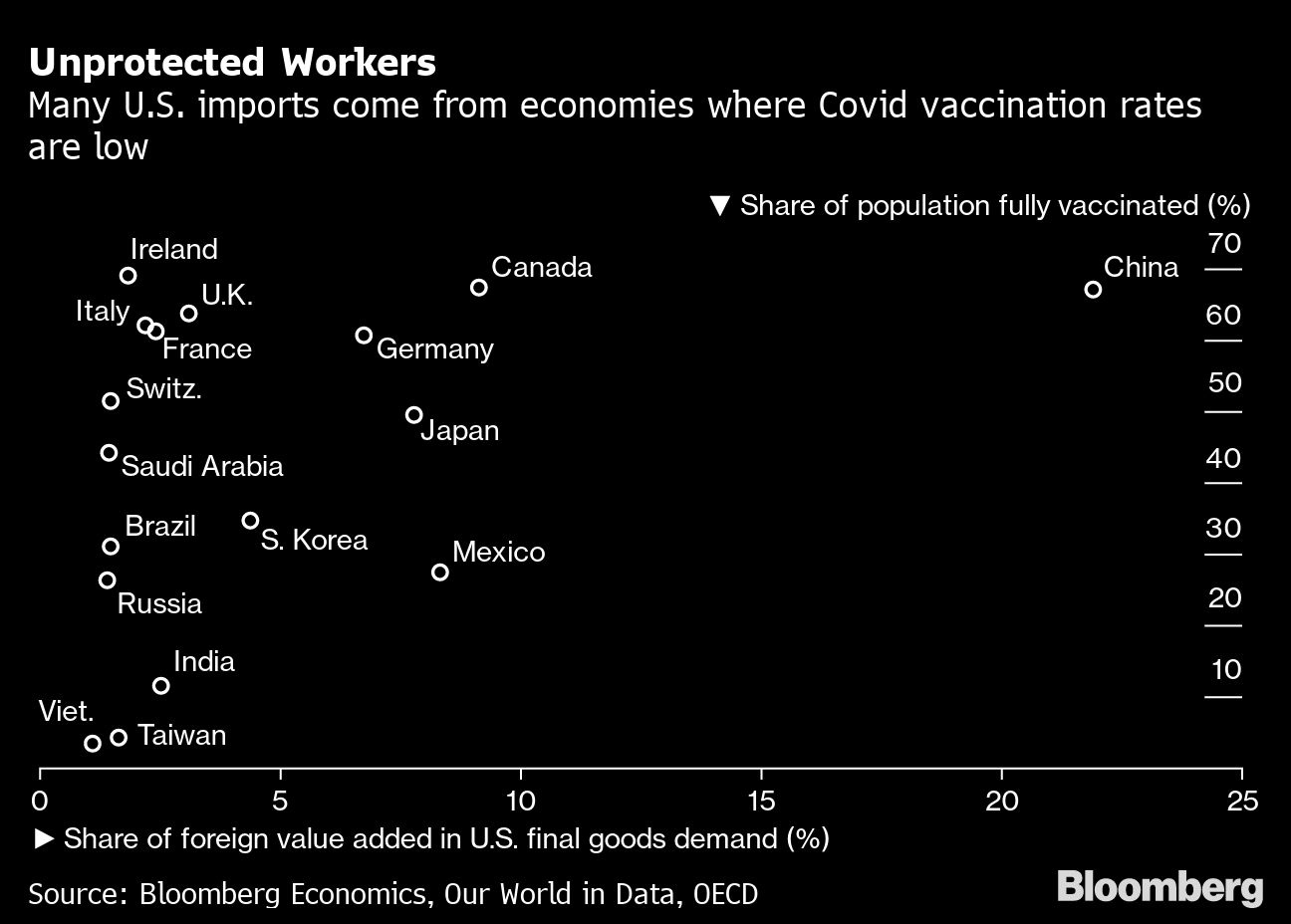 It could happen again. Low vaccination rates in many Asian countries means continued vulnerability to lockdowns, like the one that recently shuttered a city of 4.5 million in China’s Fujian province. Almost all the durable goods in the U.S. consumer-price index depend on inputs from economies where less than a third of the population has been vaccinated. In Taiwan, one of the main nodes in the global semiconductor supply chain, the percentage of the population that is fully vaccinated is still in single digits.

All of this adds to the risk of further “transitory” shocks to inflation. One early-warning signal: according to press reports, semiconductor giant TSMC has announced plans for price hikes of as much as 20 per cent next year.

For the Fed, inflation running hot into 2022 would be troubling on its own, and worse if it triggers a shift in inflationary psychology. If businesses start to feel comfortable setting prices higher, and workers start demanding higher wages to compensate, the risk is a situation reminiscent of the wage-price spirals of the 1970s — when it took a recession engineered by the Volcker Fed to squeeze inflation expectations out of the system.

Unmoored inflation expectations would very likely trigger an early and aggressive response from the Fed: an accelerated taper, and a rate hike in 2022. 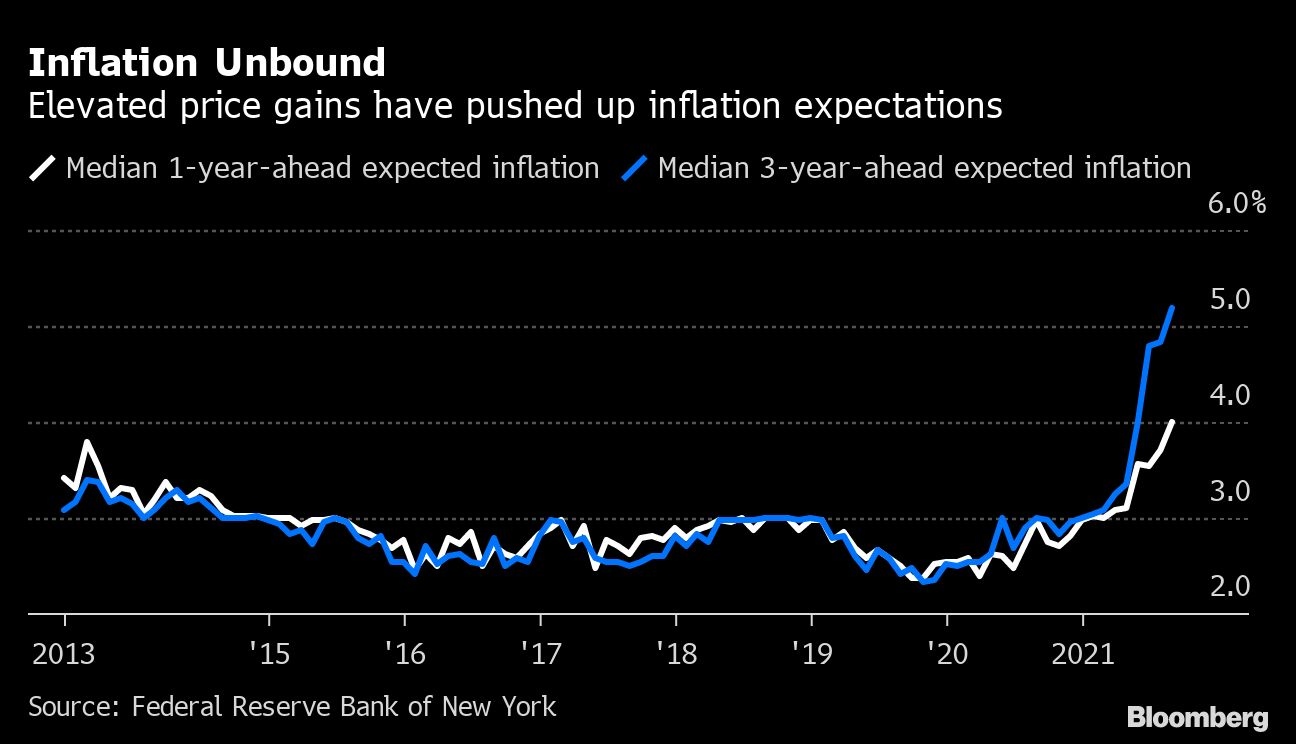 A no-win scenario would be if the two blows — to output and jobs, and to supply chains and prices — landed at the same time, leaving Fed officials in a quandary. Ease policy to support growth and they would add fuel to the inflationary fire. Tighten to bring prices under control, and they would exacerbate the drag on the recovery, throwing more Americans out of work.

To be sure, none of these shocks are part of Bloomberg Economics’ base case. Agreement in Congress, or decision by the Democrats to go it alone, could remove the default risk. China has in the past proved skillful at shifting gears to avoid a housing crash. Vaccination rates in Asia are rising. The latest U.S. data — inflation slowed and retail sales rose — have been encouraging. 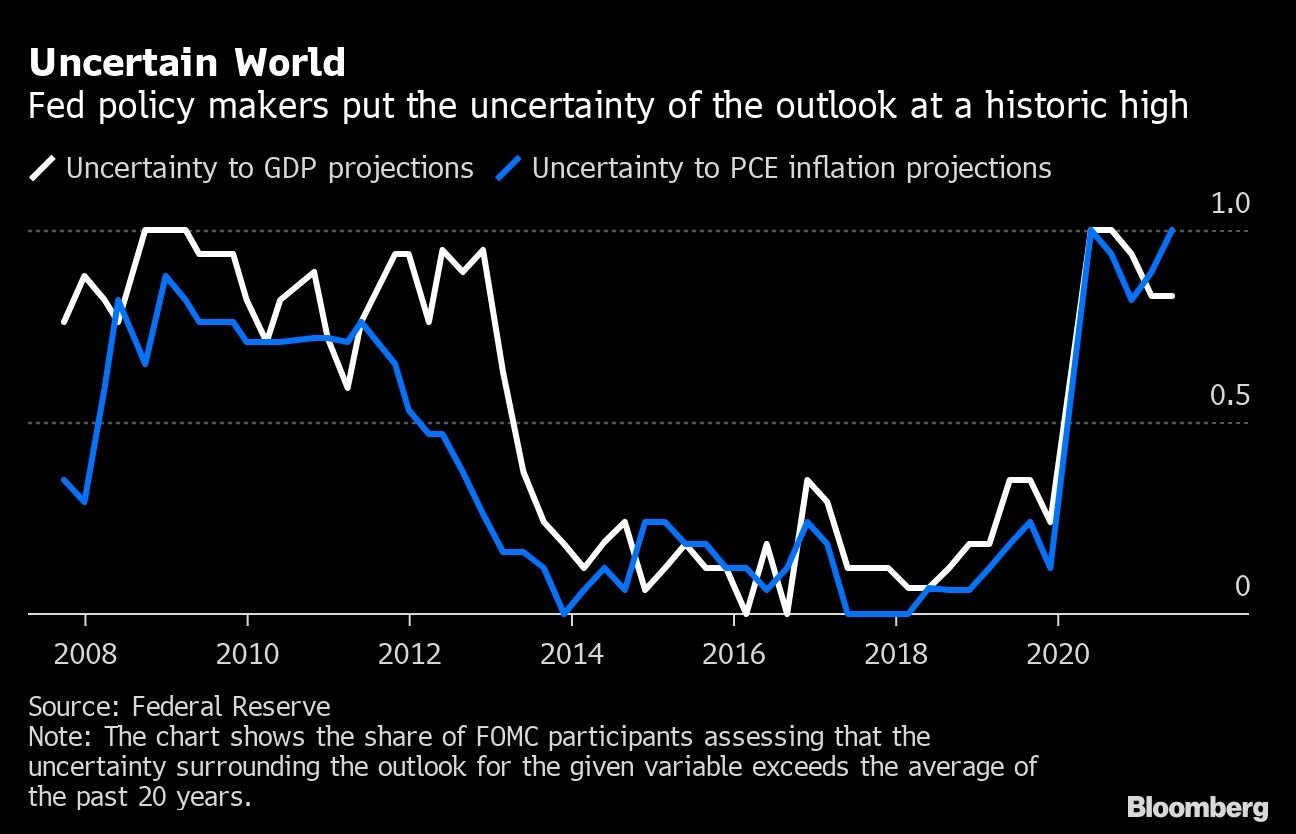 Still, one of the lessons of the Covid crisis has been not to attach too much confidence to the base case. At the start of 2021, few anticipated that inflation would be running hot into the final months of the year — evidence that foresight is one of the pandemic’s many casualties. All 18 participants in the FOMC rate the uncertainty surrounding the outlook as greater than the average over the past 20 years.

“Uncertainty” said former Fed Chair Alan Greenspan, “is not just an important feature of the monetary policy landscape; it is the defining characteristic of that landscape.” With the delta variant, the debt ceiling standoff, turmoil on China’s property market and the risk of sustained high inflation all clouding the outlook, that’s a statement that rings true today.

Even as the Fed’s September meeting sets out further details on the path ahead for the taper and rates liftoff, expect Powell and his colleagues to leave themselves flexibility to shift course in face of changing circumstances. If risks scenarios collide, they’ll need all that flexibility and more.

Analysis was conducted using the SHOK <GO> model of the U.S. economy. The model captures the interplay between demand, inflation, the exchange rate and interest rates when shocks hit.

The equations in the model are reduced-form and New Keynesian in spirit. The key relationships include an IS-relation, a Phillips curve, a Taylor rule, an uncovered interest rate parity and a set of autoregressive equations to determine exogenous shocks. The model is estimated using Bayesian methods on quarterly data between 2000-2019.