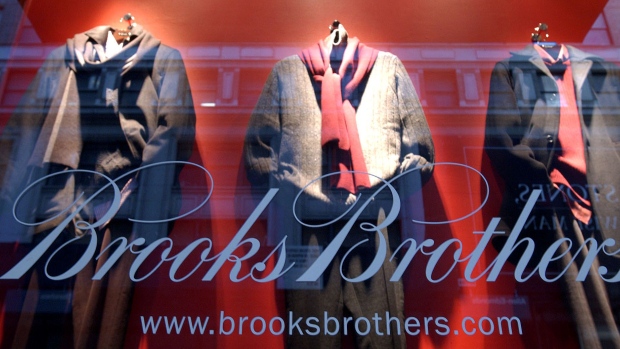 Bankrupt retailer Brooks Brothers Group Inc. received a higher offer for financing from Authentic Brands Group LLC that will keep the chain running during the court process, according to people with knowledge of the situation.

The competing plan for debtor-in-possession financing came after Brooks Brothers filed for court protection on Wednesday, said the people, who asked not to be named discussing a private matter. They declined to say who is backing the new bid.

A higher offer could allow the providers to leapfrog the financing plan that Brooks Brothers already lined up, potentially putting the new lenders in position to own the 200-year-old men’s clothier. A representative for Brooks Brothers declined to comment.

Ahead of the Chapter 11 filing, Brooks Brothers had arranged a $75 million DIP loan from WHP Global, owner of the Joseph Abboud and Anne Klein brands. The new offer has lower fees and provides more liquidity, one of the people said.

While early in the process, parties have discussed initial bids of around $300 million for the company’s assets, which would serve as the floor for other bids to come in and offer higher amounts, the people said. A sale can only be finalized with the judge’s approval.

The situation remains fluid and is likely to change as the retailer and its advisers consult with various parties, the people said.

Amid the retail industry’s carnage, chains with strong name recognition have attracted bids from firms such as WHP that specialize in managing apparel brands.

Bloomberg reported prior to the bankruptcy filing that Authentic Brands Group LLC and mall landlord Simon Property Group Inc. were in talks to buy Brooks Brothers. Authentic has a history of buying well-known brands that have fallen on hard times, including Barneys New York Inc. A representative for Authentic declined to comment.

The pandemic hit Brooks Brothers hard, shuttering office buildings and hurting demand for business wear as people worked from home. The bankruptcy process is designed to keep the retailer operating while it works to turn around its business and pay its debts.

Current plans call for the chain to permanently shut 51 Brooks Brothers stores in the U.S. It has 500 worldwide in 45 countries, with 200 in North America, according to a statement Wednesday.

Brooks Brothers is the latest in a string of household names to seek court protection as lockdowns during the coronavirus outbreak add to the woes of old-line retailers. Neiman Marcus Group Inc., J. Crew Group Inc. and John Varvatos Enterprises Inc. each filed for bankruptcy since the virus took hold.

The retailer has been trying to sell itself since last year as many of its U.S. locations struggled with declining sales, Bloomberg reported earlier. The effort continues in an auction during the bankruptcy, where parties will submit their highest and best offers to the court.

Brooks Brothers is working with lawyers at Weil Gotshal & Manges and restructuring advisers at Ankura Consulting Group, with PJ Solomon LP providing financial advice, according to the statement.

The case is Brooks Brothers Group Inc., 20-11785, U.S. Bankruptcy Court for the District of Delaware.