Bitcoin continued its climb toward all-time highs, bolstered by optimism over the upcoming launch of the first Bitcoin futures exchange-traded fund in the U.S. by asset manager ProShares.

ProShares plans to start the fund on the New York Stock Exchange Tuesday, its chief executive Michael Sapir said in an interview. The move is the latest sign of how cryptocurrency-related investments are becoming more mainstream.

“ETFs mean that this year Bitcoin interest could see several billions of dollars come under management which should keep the entire space buzzing,” Edward Moya, senior market analyst at Oanda Corp., wrote in a note. 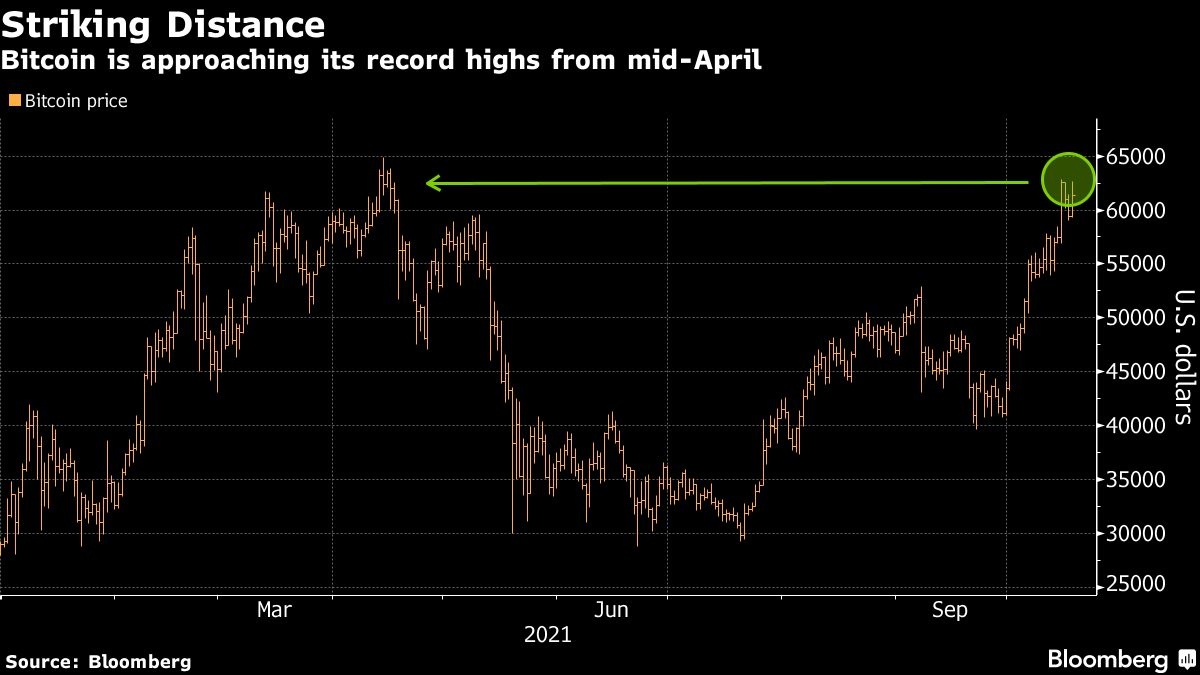 The prospect of increased interest in Bitcoin from institutional and retail investors is bolstering the token, whose 2021 climb dwarfs the returns from traditional assets like stocks, bonds and gold. That’s a marked change from mid-year, when worries about its energy usage and a harsh crypto crackdown in China sent prices tumbling below US$30,000.

Other coins are also up so far this week, including second-largest token Ether. The Bloomberg Galaxy Crypto Index is around the highest levels since May.

The technical setup for Bitcoin in its latest rally is a concern for Rick Bensignor, the president of Bensignor Investment Strategies, who wrote in a note that being so close to highs might make him “think twice about buying Bitcoin now.”

“It’s another big step in the convergence between traditional and crypto markets,” she said. “But, I do think that there will be perhaps not quite as much monetary demand for this product as the market seems to be signaling.”

Genesis is affiliated with Grayscale Investments LLC, which reiterated Monday that it will seek to covert its Bitcoin trust to an ETF.

Others are more upbeat -- the futures-based Bitcoin ETF could attract more than US$50 billion in inflows in its first year given the hype around it, according to noted Bitcoin bull Tom Lee, co-founder of Fundstrat Global Advisors.

“Bitcoin is in a strong position as it challenges last resistance at US$64,000 above which a breakout will target US$100,000,” said Rich Ross, technical strategist at Evercore ISI. “The fourth quarter offers fertile ground for the most speculative.”