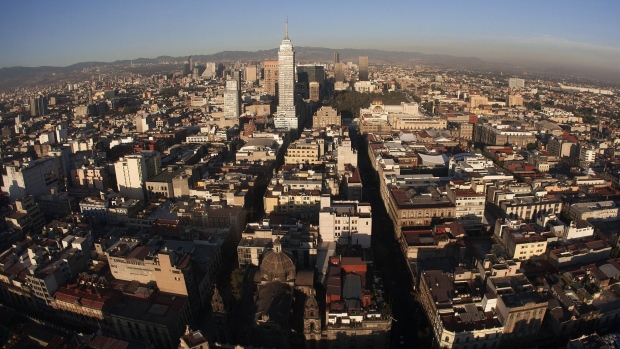 The Latin American Tower, center, stands in the city skyline in this aerial photograph taken from a helicopter in the Condor Group, a fleet of helicopters operated by the Federal District Secretariat of Public Security, in Mexico City, Mexico, on Friday, Feb. 15, 2013. , Bloomberg

Mexican pension funds are funneling money toward a new socially responsible ETF and demanding local companies offer more data on how they are handling environmental, social and governance issues.

BlackRock Inc.’s iShares ESG MSCI Mexico ETF has seen more than US$460 million in flows since its launch at the end of July, according to data compiled by Bloomberg. During the same period, investors dumped about US$350 million of the iShares Naftrac ETF that has been favored by local pension funds, or Afores, to bet on the benchmark Mexbol Index.

Samantha Ricciardi, managing director of BlackRock Mexico, said the Mexican ESG ETF has been one of the company’s most successful out of 40 new ESG products launched this year. She said only about 10 per cent of the inflows had migrated to the ESGMEX ETF from the Naftrac, and that most of the flows were new money from institutional investors. Globally, she said BlackRock was seeing strong demand.

“Even during the months of market volatility at the beginning of the year due to the coronavirus pandemic, flows to sustainable ETFs persisted,” she said Tuesday in a webcast about the new product.

Ricciardi was joined by executives from half of the country’s pension funds: Afore XXI Banorte, the country’s largest, as well as the funds of Sura Asset Management, Citibanamex, Principal Financial Group and Grupo Bal’s Profuturo.

With 24 companies versus the Mexbol’s 35, the ESG ETF is even more concentrated in the country’s top names like Carlos Slim’s telecommunications giant America Movil SAB, Wal-Mart de Mexico SAB, and Coca-Cola bottler and convenience store operator Fomento Economico Mexicano SAB, according to data compiled by Bloomberg. The ESGMEX ETF is down 0.1 per cent since its launch through Wednesday’s close compared with a 0.6 per cent decline in Naftrac over the same period.

Bianca Taylor, Boston-based founder of ESG consultancy Tourmaline Group, said the concentration of the index in traditional companies points to the lack of competition in Mexico and just how few options there are for sustainable investing.

“This is a good initial step, but it’s important investors don’t mistake the high concentration for high-quality ESG,” Taylor said in a telephone interview. “There is still a lot of work to be done with respect to competition. Hopefully this will lead to awareness about the need for a larger number of market players.”

Last week, 80 Mexican institutional investors including pension funds and insurance companies that manage a total of 6.3 trillion pesos (US$293 billion) signed a public declaration asking local companies to curb greenhouse-gas emissions and increase their ESG disclosures in line with global recommendations and concepts from the Sustainability Accounting Standards Board (SASB).

Irving Vazquez, head of ESG integration at Afore Sura, said the effort to influence companies was a first for Latin American institutional investors, and it followed a similar call by BlackRock Chief Executive Officer Larry Fink earlier this year to back SASB standards and recommendations by the Task Force on Climate-related Financial Disclosures.

“We need companies to create consciousness about their impact on the environment, on society and interest groups and, what is more, report this information in a standardized way,” Vazquez said.