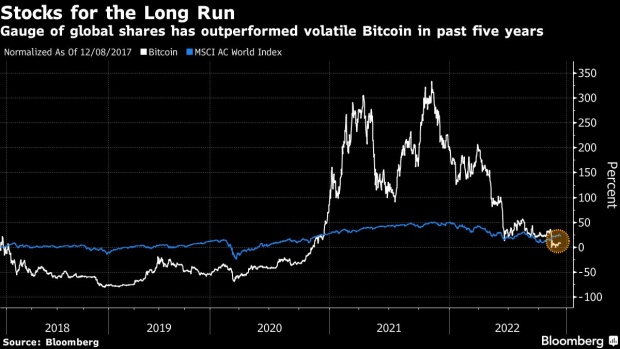 (Bloomberg) -- Amber Group, one of Asia’s leading crypto platforms, has continued to lay off staff and put a funding round on hold amid turmoil in the digital-asset sector following the bankruptcy of the FTX exchange.

The job cuts at the Singapore-based company, whose backers include Temasek Holdings Pte and Sequoia China, affected worldwide locations, according to a person familiar with the matter, who asked not to be identified discussing private information.

Amber had secured some of a planned $100 million fund raising that was broken up into multiple parts, but that round — which would have kept the startup’s valuation at $3 billion — has been paused in the fallout from FTX, the person said, adding the firm is now seeking a different funding round.

The crypto sector is in a febrile mood, agitated by a $2 trillion drop in the value of tokens and major blowups of which FTX is the most breathtaking.

Amber itself has rebutted online speculation that it may be the next domino to fall. A top executive tweeted Wednesday the company is conducting “business as usual” after a blockchain data provider claimed it faced bankruptcy based on an analysis of crypto holdings and transfers.

The person familiar said Amber is still doing deposits, withdrawals and trading as it normally would. The person added that Amber doesn’t have any entities in China, in response to reports that it closed offices there.

Amber has previously said less than 10% of its trading capital was stuck on FTX and that the stranded funds do not “pose a threat” to its operations.

The person familiar said Amber’s overall trading capital has shrunk since the collapse of FTX but business operations aren’t under threat.

Amber was founded in 2018 by a group of people that included former Morgan Stanley traders and raised $200 million at a $3 billion valuation in February.

Traded volume on the platform exceeds $1 trillion and institutional clients number over 1,000, according to the company website. In September, the firm said it had cut as much as 10% of its staff.

One of Amber’s co-founders, Tiantian Kullander, passed away unexpectedly in his sleep in November at the age of 30.