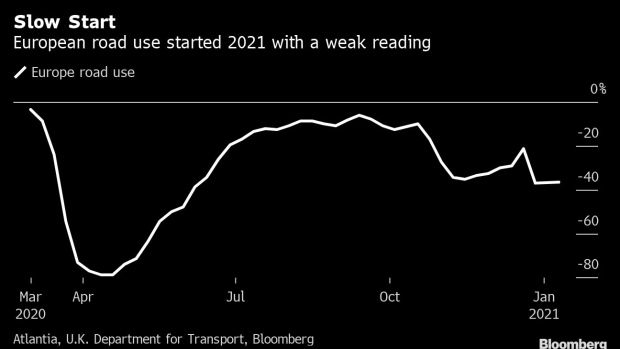 (Bloomberg) -- Europe’s oil demand is off to a sluggish start to the year as restrictions on movement limit the consumption of road fuels.

Road use in the U.K., France, Italy and Spain was down 37% last week compared with pre-virus levels, according to data compiled by Bloomberg. Excluding year-end holidays, that’s the weakest weekly figure since many parts of the continent were locked down back in June. Consultant Rystad Energy says the slump so far this month translates to a drop of about 1.76 million barrels a day in consumption.

This time around, the impact on the oil market as a whole is being negated by cold weather across the northern hemisphere that’s boosting demand for fuels related to heating. Unilateral production cuts by Saudi Arabia are also supportive. But the weakness serves as a reminder that a full return to normal levels of consumption could still be months away.

“Clearly Europe is struggling for demand,” Russell Hardy, chief executive officer of Vitol Group, the world’s biggest independent oil trader, said at a conference this week. “It feels like we’ve got two or three months across Europe, and possibly across the States, where the spread of the disease fights against the vaccination program.”

It’s a far-from-uniform picture across the continent. The impact on consumption has been more severe in countries like the U.K., where a strict lockdown is in effect. Sales of gasoline were about 45% lower than pre-lockdown levels last week. That’s weaker than the November lockdown, but not as bad as in last year’s first set of restrictions, a government report said.

In Berlin, road congestion -- a proxy for how busy the streets are -- is down 9 percentage points on last year’s already-low average, according to TomTom NV. It’s a similar picture on other major cities in the region, from Amsterdam to Warsaw.

“Our real-time data confirm that road fuels demand has been substantially affected by the new restrictions in the last weeks,” said Sofia Guidi Di Sante, an analyst at Rystad.