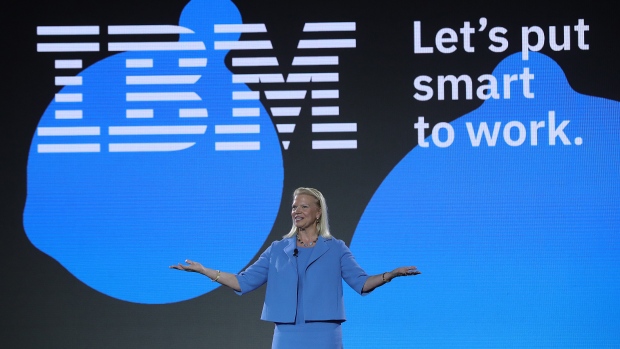 International Business Machines Corp. reported third-quarter revenue that missed Wall Street estimates, with the long-awaited revenue infusion from Red Hat failing to compensate for continued declines in other parts of its business.

Total revenue was US$18 billion in the three months ended Sept. 30, down 3.9 per cent from a year earlier, the Armonk, New York-based company said in a statement Wednesday. Analysts had forecast US$18.2 billion. It marked the fifth consecutive quarter of shrinking sales at IBM, while analysts had been looking for signs that Red Hat, which was incorporated for the first time in these results, would change the narrative.

In July, IBM completed the purchase of the open-source software provider for US$34 billion – sealing the world’s second-largest technology deal. Adjusted revenue from Red Hat was US$371 million in the third quarter, better than the US$350 million IBM told investors it was expecting in August. Red Hat was folded into IBM’s cloud and cognitive software unit, which pulled in US$5.3 billion in revenue, up 6.4 per cent from a year earlier.

Still, IBM’s overall sales declined due to divestitures from commerce software businesses, foreign currency effects and poor performance in one of its key units. Revenue from Global Technology Services, the company’s infrastructure and tech support unit, fell 5.6 per cent to US$6.7 billion. Global Business Services revenue, which includes IBM’s consulting arm, increased only 1 per cent to US$4.1 billion.

The shares fell 3.2 per cent in extended trading. They had gained 25 per cent this year through the close of trading Wednesday.

“The one thing IBM doesn’t need is a disappointing quarter,” Ian Campbell, CEO of Boston-based Nucleus Research, said in an interview before the results were released. “There have been so many quarters that have shown a downward trend in revenue. This quarter we need to see some change as IBM has fallen to the point where they have no name recognition.”

Analysts and investors might have to wait a little longer to see any real uptick in revenue growth from Red Hat. Chief Financial Officer Jim Kavanaugh said in an interview that IBM will be back to a sustained level of revenue growth in 2020.

Earnings excluding some costs were US$2.68 a share, largely in line with the average analyst projection of US$2.67. IBM reiterated it sees full-year adjusted operating profit of US$12.80 a share.