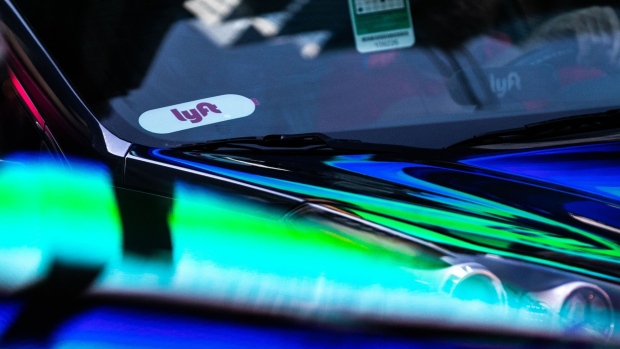 A Lyft Inc. sticker is displayed on a vehicle in the Time Square neighborhood of New York, U.S., on Wednesday, May 8, 2019. Simmering tensions between drivers and ride-hailing companies are flaring again, as drivers in major cities across the U.S. and the U.K. went on strike Wednesday over low wages and unstable working conditions. Photographer: Jeenah Moon/Bloomberg , Bloomberg

Lyft Inc. quarterly results and guidance for 2020 disappointed investors who punished the ride-hailing company for not promising profits sooner. The shares dropped more than 5% in extended trading.

Lyft’s results came a few days after larger rival Uber Technologies Inc. reported quarterly numbers that blew past analysts’ expectations and announced that it was moving up its target for profitability. The news sent Uber’s stock price soaring.

Lyft didn’t provide updated guidance on turning a profit. Late last year, the company said it would be profitable on an adjusted basis by the fourth quarter of 2021. The stock slipped to as low as US$50.82 in extended trading, after closing at $53.94 earlier in New York. Lyft’s rally of more than 25% this year -- along with Uber’s recent results -- raised the bar for Tuesday’s report.

“Lyft seemed super, super confident with the guidance they did provide,” said Tom White, an analyst at D.A. Davidson. “Uber has a more aggressive timeline,” he said, but added that Uber “made some assumptions,” such as planned reductions in price discounts, while making those projections.

Lyft said revenue for the three months ending Dec. 31 jumped 52% to US$1.02 billion from the same period a year ago. Analysts had expected revenue of US$985.8 million. The company narrowed its adjusted net loss, which excludes stock-based compensation, acquisition expenses and other costs, to US$121.4 million during the fourth quarter, compared with US$238.5 million for the same period a year earlier. Analysts had expected an adjusted loss of US$161.9 million, according to data compiled by Bloomberg.

“In 2020 we expect strong top line growth as well as important progress on our path to profitability,” Lyft Chief Financial Officer Brian Roberts said in an interview on Tuesday.

Unlike Uber, Lyft has focused solely on mobility, a category that includes ride-hailing, electric bikes, scooters and integration with public transit. The company’s strategy has been to move further into existing markets to capture more active riders and increase how much they spend on Lyft services. In recent months, the company has added public transit options to its app, introduced monthly subscriptions and offered an option to decrease ride costs by scheduling pickup a few blocks away. Last year was the first time the company had combined all mobility options on its app, a strategy designed to drive greater revenue per rider in 2020.

Like Uber, Lyft is trying to focus on profitable growth by curtailing the discounts and incentives it initially used to hook new riders and drivers. The San Francisco-based company has also sought to trim costs. Last month it said it would cut 90 jobs as part of a larger restructuring effort.

Lyft said it will continue to expand its partnerships with other companies, like the one it recently struck with JPMorgan Chase & Co. offering perks for some cardholders. It will also pursue contracts with health-care companies and other enterprise customers. Corporate clients tend to ride often, and the business is considered high-growth and high-margin. The move represents a step onto Uber’s turf, which has long been a destination for business riders and continues to be a focus for the company in 2020.

“We really want to win on product innovation, on customer experience and brand preference,” Lyft Chief Executive Officer Logan Green said on a call with investors Tuesday, “not on things like coupons or incentives.”

Some analysts have flagged a new California law reclassifying many gig economy workers as employees as a risk for Lyft, Uber and others, potentially triggering price hikes estimated to be as high as 30%. Roberts waved off concerns about the law’s impact, saying Lyft was “100% focused” on putting an alternative measure on the November ballot and has already helped collect 325,000 of the 500,000 signatures required by May to qualify.