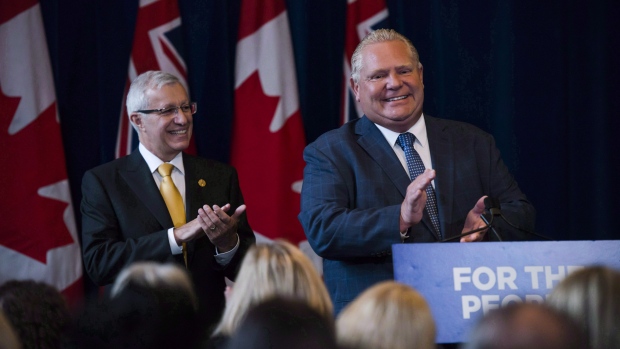 Finance Minister Vic Fedeli applauds alongside Premier Doug Ford after speaking to members of his caucus in Toronto on September 24, 2018. , The Canadian Press

Finances in Ontario, already one of world’s most indebted regions, will get a whole lot worse if the government follows through on its campaign pledges.

The budget deficit in Canada’s most populous province is poised to jump almost 50 per cent to $18.7 billion in 2019-20 from this fiscal year under plans by new Premier Doug Ford, according to a report from Toronto-Dominion Bank. By 2022-23, the province’s net debt would rise to $483 billion, or to about 48 per cent of its annual output.

Finance Minister Victor Fedeli is scheduled to release an economic update on Nov. 15. It comes in the wake of an independent inquiry that estimated in September the deficit for the fiscal year ending March 31 2018-19 could be as high as $15 billion, more than double the previous government’s forecast, due largely to accounting changes. TD is estimating a budget deficit of $12.5 billion for this year including a $1 billion reserve.

“The upcoming fiscal update will provide a huge opportunity for the government to signal how it plans to slay the deficit monster,” TD’s economists Derek Burleton and Rishi Sondi wrote in the note released Wednesday. “From a credibility perspective, the sooner the government gets its fiscal house in order, the better.”

Ford, who took office late June, pledged to cut corporate and personal income taxes, which could cost $3.6 billion per year by year three of its mandate, according to TD. A promise to reduce the gas tax would would cost another $1.2 billion per year.

To be sure, Ford has committed to balancing the books over time, and could introduce cuts or other spending restraints. The government has already halted expansions at some universities, scrapped a pilot basic income program, and plans to cap social assistance which together with other measures could shave off $2 billion from spending this year, according to the report. Allowing other programs to lapse could save another $1 billion while freezing a minimum wage hike may support employment and boost revenues.

“If the government plans to honor its campaign promises, program spending will have to be pared significantly,” the economists said. “Should the economy take a turn for the worse, the government’s job becomes exponentially harder. All told, the path to balance will be fraught with hard decisions.”