Short interest as a percentage of shares outstanding on the US$48 billion iShares iBoxx $ Investment Grade Corporate Bond ETF (ticker LQD) jumped to more than 15 per cent, up from 5.9 per cent at the start of the year, according to data from IHS Markit Ltd. That’s the highest level since last March, when high-quality bonds sold off as investors raced to raise cash in the face of a quickly spreading pandemic.

Now, with the vaccine rollout underway and an economic reopening in sight, investment-grade credit spreads to Treasuries have tightened sharply. Meanwhile, building reflation bets have boosted long-dated Treasury yields to the highest levels in a year, renewing concerns about relatively high LQD’s duration -- a measure of sensitivity to interest-rate changes. Against that backdrop, the risk-reward for high-grade corporate bonds looks less compelling, according to Wells Fargo Investment Institute.

“The bear case is that spreads are about as tight as they have been in some time and that rates will rise,” said Sameer Samana, the firm’s senior global market strategist. “The bull case, which has meager returns, is that everything remains constructive for credit, and you clip a coupon that’s getting ever smaller. To sum up, there’s a weak reward if all goes right, and what could be a good bit of downside, especially if rates jump sharply or the reopening gets interrupted.” 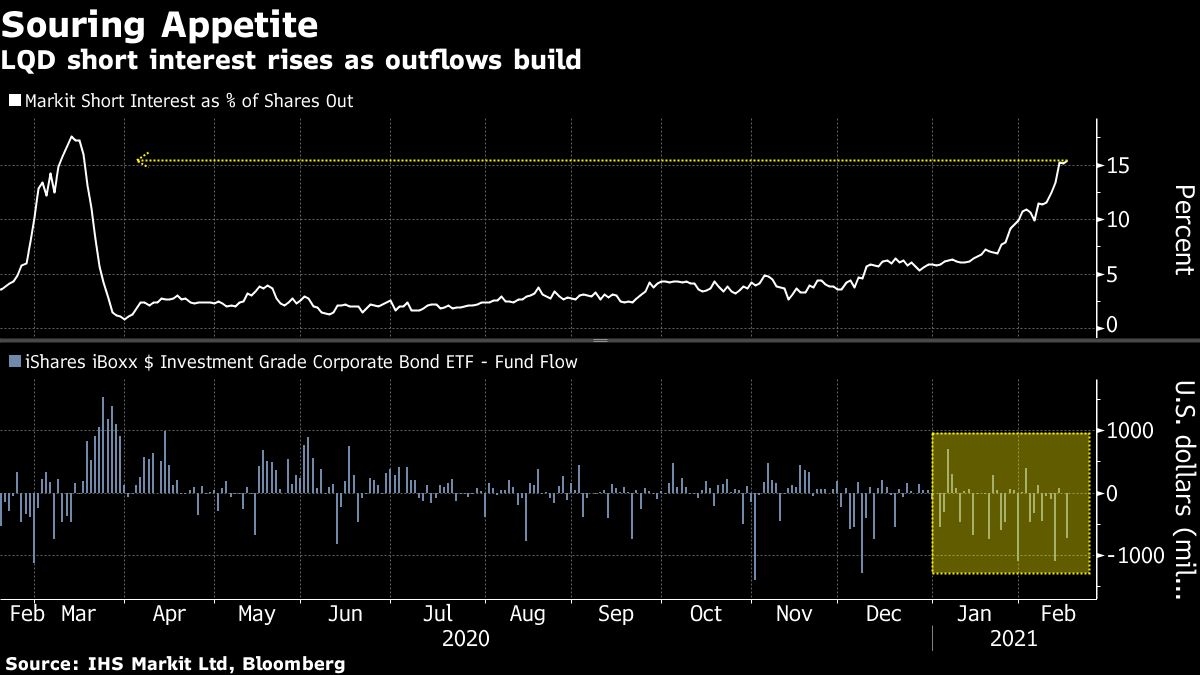 LQD has climbed more than 27 per cent since its late March lows, but has tumbled roughly 3.2 per cent year-to-date. Investors have pulled roughly US$6 billion from the ETF so far in 2021, after pouring over nearly US$14.9 billion into the fund in 2020, according to data compiled by Bloomberg.

The hunt for yield is evidently sending bond buyers down the ratings spectrum as economic data perks up. The average yield on BB debt, the safest of junk bonds, fell to a record low of 2.98 per cent on Tuesday, according to Bloomberg Barclays index data. And across asset classes, the outlook is bright, Samana said.

“We’re very constructive on the investing backdrop,” Samana said. “We’d rather take the risk in equities."