Technology shares led losses in the S&P 500 as giants Apple Inc. and Tesla Inc. dragged down the Nasdaq 100 -- with the electric-car maker tumbling more than 4 per cent. Target Corp. slumped on an underwhelming profitability outlook. Rocket Cos., a Detroit-based holding company, soared after a news report that the stock could become a Reddit target for its high short-interest.

Bullishness among Wall Street strategists is near levels that have presaged potential trouble for stocks, according to a Bank of America Corp. gauge. The measure assesses the average recommended allocation to equities and is close to triggering a sell signal. A valuation methodology, sometimes called Fed model that compares corporate profits to bond rates, recently showed stocks were losing their edge. Earlier Tuesday, China’s top banking regulator said he’s “very worried” about risks from bubbles in global financial markets. 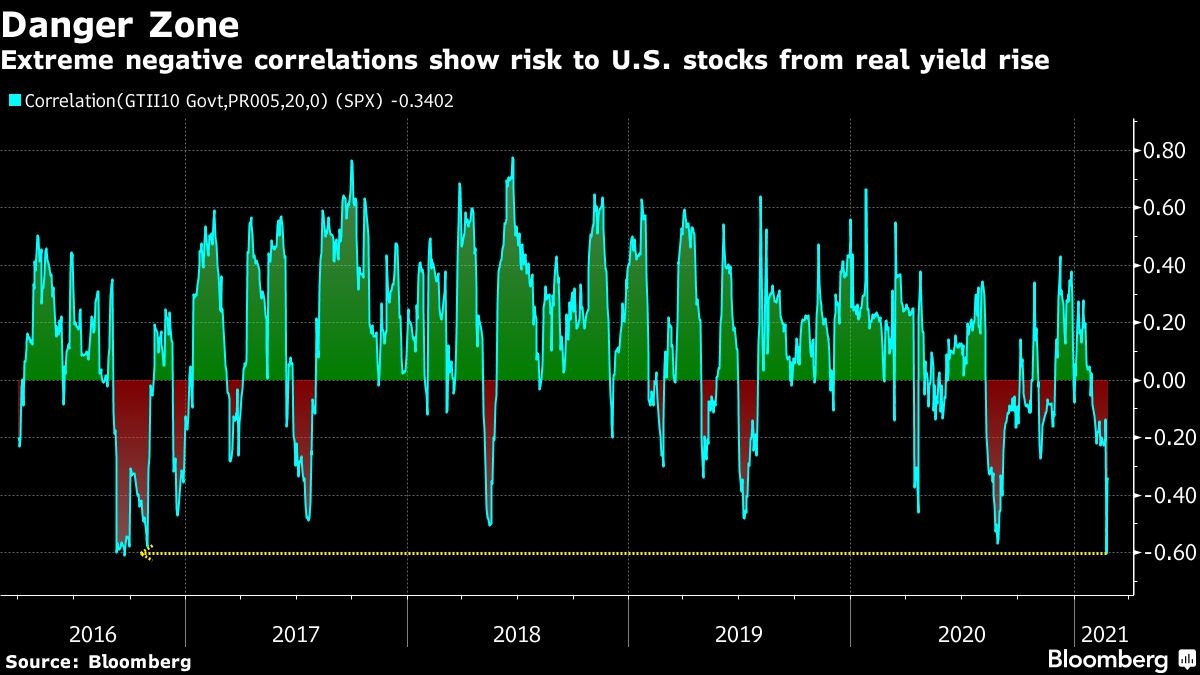 Last week, the correlation between real yields and U.S. equities dropped to its most-negative level in five years. That strong inverse relationship suggests inflation-adjusted Treasury rates have reached a point where further gains could quickly send the S&P 500 lower -- as they feed into steeper borrowing costs and lessen the appeal of other assets. The benchmark gauge of American shares has surged more than 70 per cent from its March 2020 lows.

For Bill Northey, senior investment director at U.S. Bank Wealth Management, rising rates are seen as an important element of what’s “giving investors pause at this point in time.” He also noted that they’re relevant when it comes to figuring out the appropriate level of valuations against the stream of corporate earnings.

“Did we come too far, too fast in pricing in a strong economy and corporate earnings recovery?” he said.

There are some key events to watch this week:

U.S. Federal Reserve Beige Book is due Wednesday.
OPEC+ meeting on output Thursday.
U.S. factory orders, initial jobless claims and durable goods orders are due Thursday.
The February U.S. employment report on Friday will provide an update on the speed and direction of the nation’s labor market recovery.