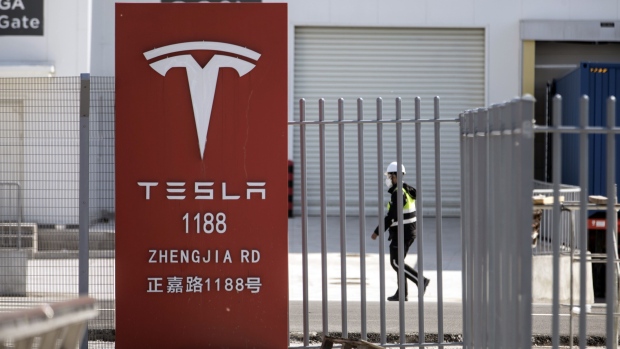 A worker walks past gates at the Tesla Inc. Gigafactory in Shanghai, China, on Monday, Feb. 17, 2020. Bloomberg/Qilai Shen

Tesla Inc.’s financing arrangements in China may be the subject of the Securities and Exchange Commission inquiry that the electric-car maker disclosed last week, according to analysts at Evercore ISI.

The financing Tesla lined up from local banks last year may have allowed the carmaker to delay recognition of capital expenditures, Chris McNally, who rates Tesla shares the equivalent of a sell, said in a Feb. 14 report. The Evercore analyst said the arrangements also probably help explain how Tesla spent just US$1.3 billion on capex last year, a little over half its budget for as much as US$2.5 billion.

“It’s possible that TSLA’s Shanghai factory and extremely limited capex may be what the SEC is looking into,” McNally wrote. Representatives for Tesla didn’t immediately respond to requests for comment, and Judy Burns, an SEC spokeswoman, declined to comment.

Tesla disclosed in a regulatory filing last week that the SEC sent the company a subpoena on Dec. 4 seeking information on “certain financial data and contracts including Tesla’s regular financing arrangements.” In the same filing, the company said that much of the investment in its factory near Shanghai “has been and is expected to continue to be provided through local debt financing.”

Tesla disclosed in December that it had lined up 11.25 billion yuan (US$1.6 billion) in financing from local banks for the plant, which started producing Model 3 sedans late last year.

“We are supplementing such financing with limited direct capital expenditures by us, at a lower cost per unit of production capacity than that of Model 3 production at the Fremont factory,” Tesla said last week in its 10-K, referring to its higher-cost assembly plant in California.

After two straight quarterly profits, several analysts who have remained skeptical of Tesla’s earnings power have said the company will have to increase expenditures to follow through on Chief Executive Officer Elon Musk’s plans for new products and additional factories. The company plans to roll out the new Model Y crossover this quarter, start production of its Semi model this year and open a new plant near Berlin next year. It also has Cybertruck and Roadster models in development.

--With assistance from Matt Robinson.