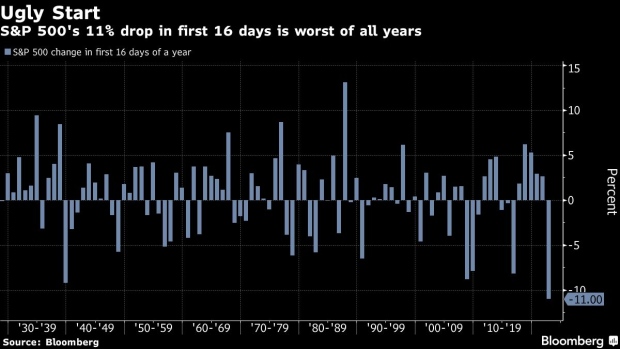 (Bloomberg) -- The stock market has never started a year falling as quickly as it is now.

The S&P 500 has dropped 11% -- heading into correction territory -- in the first 16 trading days of 2022 in its worst-ever start to a year, according to Bloomberg data that goes back over nine decades.

The downturn comes as traders brace for the Federal Reserve to tighten monetary policy and a surge in U.S. Treasury yields weighs on the outlook for stocks. A host of technical signals also suggest that more volatility may be coming up ahead.

“The Fed pulled the punchbowl, liquidity has evaporated, and the S&P and NDX broke below their 200dma for the first time since the Covid outbreak,” said Rich Ross, technical strategist at Evercore ISI.

A bear market down to the 3,800 level is likely for the S&P 500, Ross said, given “the dramatic erosion of the technical backdrop, in conjunction with the highest inflation, tightest policy, and most uncertain political and geopolitical condition in years” -- not to mention its historic rally since 2020.

The benchmark index is down as much as 4% to 4,223 on Monday, its lowest since June.