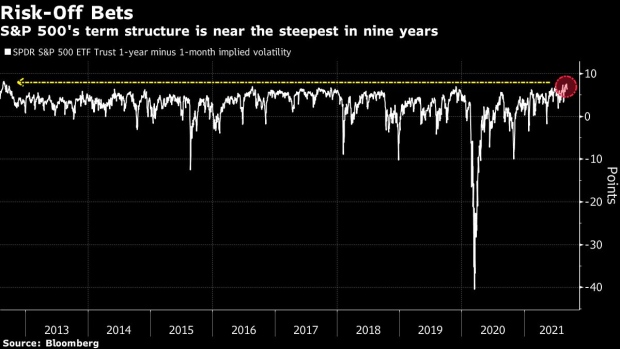 (Bloomberg) -- For months as the S&P 500 hit relentless records, Wall Street has been flummoxed by the willingness of options traders to pay up for market protection. Now all that hedging activity is looking smart as the crisis at China Evergrande Group reverberates around the world.

As valuation alarms rang louder, stock traders came into this week sitting on a pile of defensive derivatives, fed by fears over the spreading delta virus variant and the paring of pandemic stimulus. One measure of stock protection jumped to the highest since the February 2018 turmoil known as ‘Volmageddon’.

All that means money managers are in a better position to weather any fallout from China’s leverage crisis, which is overshadowing the Federal Reserve meeting as the event risk to watch this week.

“From a more macro basis, we’ve positioned for a downturn,” said Scott Bauer, chief executive officer at Prosper Trading Academy. “We’ve been accumulating puts and downside protection in the QQQs for quite a while, we have done that in the VIX by buying upside calls,” he said referring to the famous tech exchange-traded fund and the Cboe Volatility Index, respectively.

A metric known as the skew shows that demand for protective put contracts relative to bullish calls over three months is the steepest since 2018. To illustrate how unprecedented this demand is, consider the fact you could buy 25 call options on the S&P 500 due in December for just one put early last week.

And it’s not only near-term protection that options traders crave. The gap between one-year and one-month implied volatility in the largest exchange-traded fund tracking the S&P 500 Index rose to near the highest in nine years in Monday trading.

All that protection was almost useless over the northern summer as stocks churned to record after record. But as the Evergrande crisis hits, the S&P is down the most on an intraday basis since July, while the VIX also rose to the highest in months. Meanwhile the latest bearish call on the sell-side sees Morgan Stanley warn of a potential 20% drawdown in U.S. stocks.

“With the S&P being at expensive levels, if something conspires to push S&P 500 down quite sharply that’s going to see a rush for haven demand and bonds,” said Colin Finlayson, investment manager at Aegon Asset Management in Edinburgh. “The higher equity markets go, the more chance there is that they fall. If you get any kind of surprise, the downside is bigger.”

Rising demand for hedging has widened the gap between implied and realized volatility to 15 points -- a five-fold advance from its average reading since 2010. The Skew Index, which measures the difference in demand for downside put protection relative to upside call exposure, is some two standard deviations above its long-term mean.

To Jonathan Golub, chief U.S. equity strategist at Credit Suisse, there’s a bullish signal in the hedging frenzy: Historically, such elevated readings tend to mean revert and lead to an upside for stock benchmarks.

“A renormalization of this relationship” between implied and realized volatility -- “and an accompanying decline in the VIX -- should send stock prices higher,” he said in a Monday note.

Beyond the world of options, investors have taken to hunkering down in safer, less-default prone companies. S&P 500 firms with strong balance sheets are on pace to outperform those with shakier finances for four straight months, the longest stretch since May 2020, according to data compiled by Goldman Sachs Group Inc. and Bloomberg.

That’s a reversal from the start of 2021, when shares in companies with weaker finances thrived as the economy reopened, beating quality firms by the most on record.

All told, what happens to Chinese property developers, and the knock-on impact on everything from copper and nickel to sentiment, is emerging as a key driver for the tenacious S&P rally, which is still up around 15% this year.

“The volatility we’re seeing in the markets in the morning have more to do with what’s going on in China rather than in the U.S. and with the FOMC,” said Aegon’s Finlayson.