The company brushed off the industry’s disappointing December sales with its best holiday quarter in at least a decade, soothing concerns about the sector’s outlook for 2019. Comparable sales for Walmart stores in the U.S. -- a key performance barometer -- rose 4.2 per cent in the quarter that included Christmas, beating analysts’ estimates by a full per centage point.

“This is a blockbuster quarter for Walmart,” Moody’s analyst Charlie O’Shea said in an interview.

Shares jumped as much as 3.9 per cent on Tuesday -- the most in almost two months.

The strong fourth-quarter results from the world’s biggest retailer is a welcome change for a consumer sector after a bout of disappointing results. Although investors entered the holidays expecting a surge of spending, some big retailers warned sales weakened in mid-December after retailers began Black Friday promotions earlier than normal.

Commerce Department figures released last week showed U.S. retail sales fell 1.2 per cent in December from the previous month, the most since 2009 -- such a big drop that some analysts questioned if the data was undercounting online sales.

Walmart shares, which rose to as high as $103.93, had already climbed 7.3 per cent this year through Friday’s close, compared with the 11 per cent gain in the benchmark S&P 500 Index. 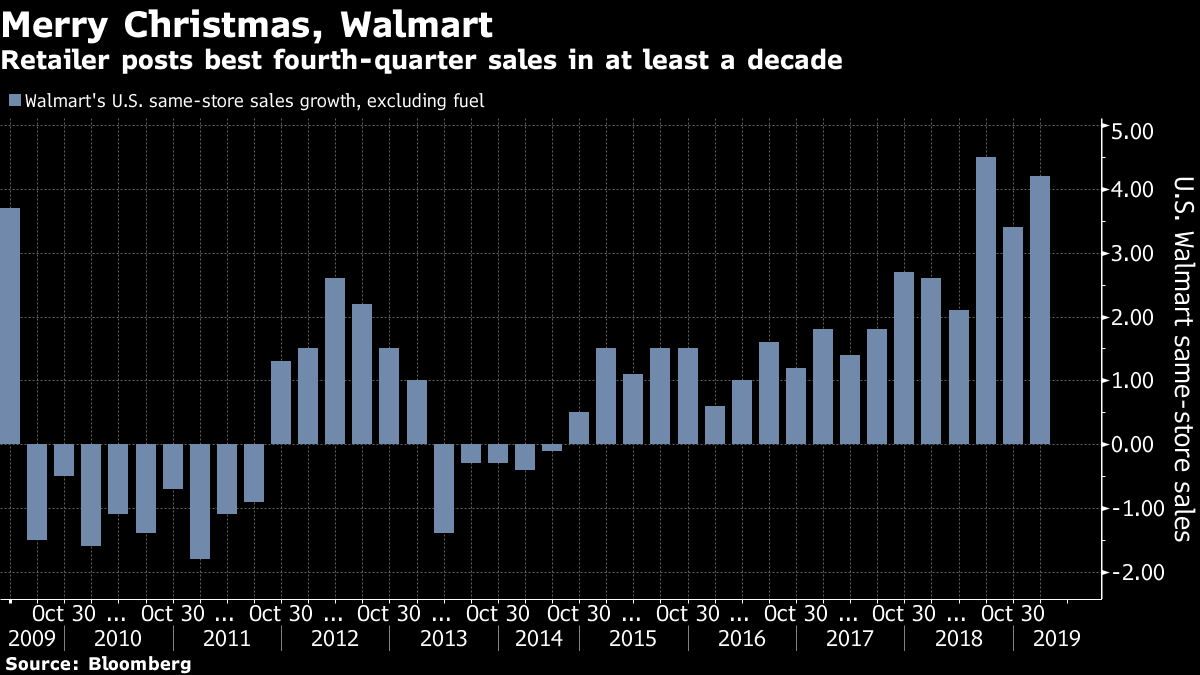 Walmart, like rivals, made a big push to grab former Toys “R” Us shoppers during the holiday season, boosting its toy assortment by 40 per cent online and holding thousands of in-store events where kids could test out items. The gambit worked, as toys helped fuel the sales beat, Chief Financial Officer Brett Biggs said in a Tuesday morning interview.

“There was extra share in the toy market and we went after it,” Biggs said. Events featuring Ryan’s World, a line of toys from a YouTube toy reviewer, were especially big, he said. He declined to provide a sales figure for toys but said general merchandise sales -- which also include home decor, apparel and electronics -- rose by a mid-single-digit per centage in the quarter.

Walmart’s e-commerce sales in the U.S. rose 43 per cent, in line with forecasts, helped by a broader assortment of brands and increased online grocery sales. This was the first holiday season for Walmart’s redesigned website, plus its expanded home delivery and curbside pickup options.

Still, there were some potentially worrying signs in the report. Higher prices -- more than increased foot traffic -- drove the sales gains. Plus some of the gains in the quarter were more related to timing: The early release of government food-stamp payments that were supposed to have become available to American shoppers in February boosted U.S. same-store sales by 0.4 percentage points in the quarter, the company said.

The company reiterated the full-year sales and profit guidance it gave in October, including same-store sales growth at U.S. Walmart stores of between 2.5 and 3 per cent -- a slight slowdown from the fiscal year that just ended. Retailers are bracing for a pullback in consumer demand this year, especially if the U.S. follows through on its threat to more than double tariffs on many Chinese goods, forcing retailers to raise some prices in response.