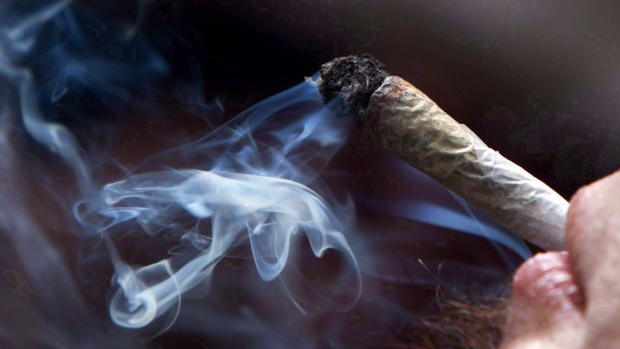 A man smokes a marijuana joint during a rally in downtown Vancouver, B.C. , The Canadian Press/Darryl Dyck

A one-month selloff in marijuana stocks seemed to ease by week’s end, but investors in the emerging sector have seen the shares drop sharply from their recent highs.

As of Thursday, many licensed producers were down about 30 per cent since mid-April, when the federal government unveiled its plan for a law to permit the legal use of recreational cannabis. “That catalyst is behind you and people are realizing that there’s a year to go” before it becomes clear how and where non-medical cannabis will be sold,” Beacon Securities Vahan Ajamian told BNN in an interview.

Provinces are wrestling with how to regulate sales. Quebec public health minister, Lucie Charlebois, told BNN that the Liberal government is mindful of warnings from the province’s psychiatrists that allowing sales to people as young as 18 may threaten public health.

As in other jurisdictions, the Quebec government must take into account a well-established network of illegal sales. “The bikers oversee an efficient system with regulated prices, a near limitless supply of weed, and distribution channels that reach into every corner of the province,” a one-time grower for the Hells Angels told the Montreal Gazette newspaper. “Everybody knows a dealer they can text, every dealer has a supplier, and every supplier has a network of grow operations they can tap into. Most people can have weed delivered to their house within minutes of sending a text message. That’s what the government is competing with.”

“For better or worse, you need regulatory action to make the market go up or down,” Khurram Malik, head of research and partner at Jacob Capital Management, told BNN on Monday.

Weed stocks dropped up to eight per cent on April 13 as the Liberals adopted what was seen by some as a sombre and punitive tone in promoting their plan. “It is not our intent to promote the use of this drug,” said Bill Blair, the MP and former Toronto police chief who travelled the country gauging attitudes.

Investors have cut the valuation they’re willing to attach to the companies, according to Echelon Wealth Partners analyst Russell Stanley. “I think it’s multiple compression,” he said in an interview. Stanley calculates that the market is now paying just seven times estimated EBITDA in 2019, down from 11 times a few months ago.

“All of these companies are starting to see some of the air coming out of them,” Purpose Investments CEO Som Seif told BNN’s Paul Bagnell on Friday.

Meanwhile a flurry of new listings means that there are simply more names competing for investor cash.  “A year ago, there were just five or six public companies,” Ajamian said. “Now’s there’s 15 or 20.”

Shares in industry giant Canopy Growth (WEED.TO) traded Friday at $7.92 for a market capitalization of $1.3-billion. That was sharply higher than $6.82 on Tuesday, but down from more than $10 in April and almost $18 in November 2016.

Newcomer Cannabis Wheaton Income Fund  (CBW.TO) scrapped a deal to raise $80-million via Eight Capital (formerly Dundee Securities) and Canaccord Genuity (CF.TO). Investors were believed to have balked at news that employees at the two brokers owned almost 10 per cent of the company, acquired for pennies per share. Cannabis Wheaton had proposed selling shares, with a warrant attached, at $1.15.

Wheaton has since hired Mackie Research Capital to raise up $50 million instead.

This week's malaise dragged down the new Horizons Medical Marijuana Life Sciences ETF (HMMJ.TO), which slumped to a new closing low of $8.28 on Tuesday, down from more than $11.80 after it began trading in April. By Friday it had recovered to $8.60.

“The whole space is being hammered so you’re either in it for the long haul or you’re not in it at all,” Mark Noble, senior vice president and head of sales strategy at Horizons ETF Management told BNN.

The Canadian cannabis stocks, along with co-lead underwriters GMP Capital (GMP.TO) and Clarus Securities, attracted unwelcome foreign attention on Wednesday. Shares in big grower MedReleaf (LEAF.TO) slid more than 20 per cent from their $9.50 offering price in a high-profile initial public offering to close at $7.40.

The MedReleaf stock issue raised $100-million, with $20-million going to selling shareholders. The company is a significant industry player. In a presentation to investors, it claimed a 19 per cent share of the Canadian medical market in Q4 of last year. MedReleaf also said that cannabis oils - preferred by medical users who don’t want to smoke - accounted for more than 44 per cent of the market in the same three months.

By Friday the stock had rallied above $9 for a market cap north of $820-million.

MedReleaf chief executive Neil Closner said in an interview that the IPO was caught up in the general cannabis selloff. “We have not heard that it was anything specific to the company." In fact, he said, a number of purchasers of the IPO bought more shares “as things looked a little silly.”

For now, investors are buying back into the sector with some of them hoping that actual shortages of cannabis will develop, especially when legal pot goes on sale.

The federal government is keen to encourage new growers but it's difficult and expensive to get a permit to produce and to set up or expand a grow operation.

Jacob Capital Management's Malik told BNN there’s a long way to go from getting a permit to actually harvesting green bushels. “If 40 licences were issued tomorrow, you have to remember one thing: it’ll take them a least a year to get decent production figured out. And it’ll take them a year beyond that to grow the full capacity.”