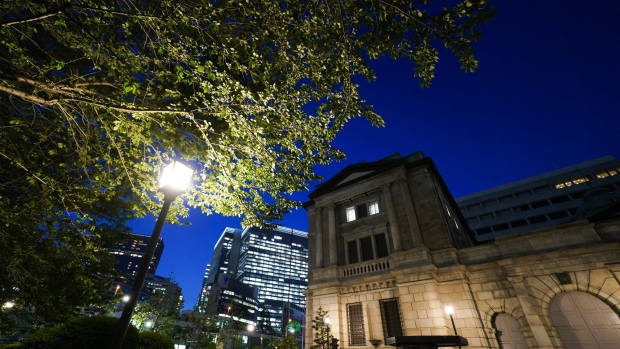 The Bank of Japan (BOJ) headquarters in Tokyo, Japan, on Monday, April 25, 2022. Governor Haruhiko Kuroda said the Bank of Japan must keep applying monetary stimulus given the more subdued inflation dynamics in the country compared with the U.S., in remarks on April 22 that omitted any reference to the yen's depreciation. Photographer: Toru Hanai/Bloomberg , Bloomberg

(Bloomberg) -- The Bank of Japan is likely to keep its current monetary easing program “for many quarters to come” to ensure an economic recovery and pursue a still remote target of sustainable 2% inflation, according to a former BOJ official.

“There’s a good case for the BOJ to be sticking to the current yield curve control for the rest of this year or even after that,” Kazuo Momma, a former top official in charge of monetary policy at the central bank, said on Bloomberg TV Monday.

With the nation’s key inflation gauge above 2% and the yen remaining around 24-year lows against the dollar, speculation keeps swirling that the BOJ may pivot toward normalization. Momma’s comments suggest speculators may be burned by bets that Governor Haruhiko Kuroda will shift the central bank’s ultra-low rate framework in the immediate future.

“In order for us to see sustainable 2% inflation, we have to see 3% wage rises continuously,” Momma, who is now an executive economist at the Mizuho Research Institute, said. “Right now wage rises are at around 1.5%. The last time we saw 3% wage hikes was 1991, more than 30 years ago.”

It’s very hard to believe that something that hasn’t happened for three decades will suddenly take place in the near future, Momma said. “I think 2% inflation target at least for now is not a realistic target for the BOJ,” he added.

Without strong wage hikes, households are already complaining about the climbing costs of living and may refrain from the kind of strong consumption needed to help a fragile economic recovery, according to Momma.

A report due Tuesday is forecast by analysts to show a 1.5% gain in overall cash earnings in May. Adjusted for inflation, they expect a 1.6% drop in real wages.

“Any interest rate hike is not really an option for the BOJ now,” Momma said.