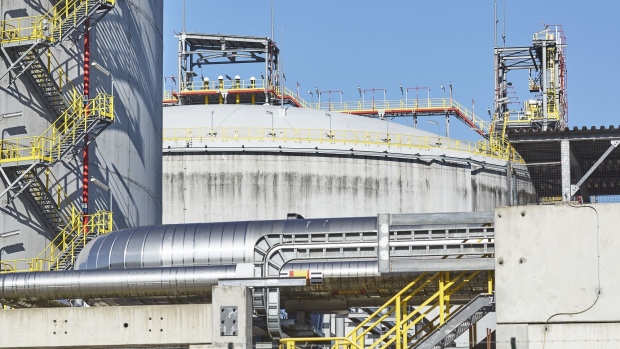 A liquefied natural gas (LNG) storage tank and pipework stand at the Gazoport terminal, operated by Polskie LNG SA, in Swinoujscie, Poland, on Friday, July 26, 2019. More "freedom gas" from U.S. shale basins is earmarked for Europe after the company behind a Louisiana export project expanded a deal with Poland. Photographer: Bartek Sadowski/Bloomberg , Bloomberg

Benchmark futures declined as much as 6.7% to the lowest level since late July. Higher-than-normal temperatures are seen in the UK and continental Europe in the next two weeks, which is likely to delay withdrawals from gas inventories for heating. It’s adding to signs that the region may be able to get through the winter even with dwindling Russian supply.

Reserves have filled at a steady pace as nations boosted imports of liquefied natural gas and pipeline supplies from Norway to make up for the loss of Russian flows. Storage sites were about 88% full on Saturday, just above the five-year average for this time of year. That has helped push gas prices down about 50% from the highs of end-August.

Forecaster Weather Co. expects moderate to high wind power potential in the region, curbing demand for gas to generate electricity and helping lower prices. In the U.K., wind output was at about 36% of total power production at 3:50 p.m. in London, while gas-power generation was at 38%, according to grid data.

Still, questions remain about Europe’s ability to replenish those reserves after the end of winter. The continent typically depends on Russian gas to build stockpiles for the next year, and any disruptions to imports from elsewhere could make restocking a difficult task.

That challenge has increased after the Nord Stream pipeline to Germany was damaged. Russian gas is still flowing through Ukraine and the TurkStream pipeline.

However, the market is already anticipating that flows via Ukraine will stop eventually, Torbjorn Tornqvist, the chief executive officer of Gunvor Group, said at the Energy Intelligence Forum in London.

Prices will stay high “for a little bit longer,” with a knock-on effect on industrial demand, said Russell Hardy, the chief executive officer of Vitol Group.

Read More: Gazprom May Halt Supply to Moldova If No Payment by Oct. 20