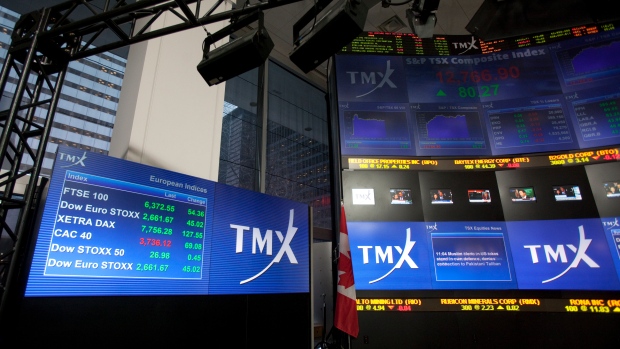 TMX Group Inc. signage and stock prices are displayed on a screen in the broadcast center of the Toronto Stock Exchange (TSX) in Toronto, Ontario, Canada, on Tuesday, Feb. 19, 2013. , Pawel Dwulit/Bloomberg

TORONTO - The number of shares traded on Canada's main stock exchange in March more than doubled compared with a year ago as the stock market plunged due to the COVID-19 pandemic.

According to statistics released by TMX Group Ltd., which operates the exchange, the volume of stocks traded on the Toronto Stock Exchange reached nearly 16.8 billion, up from 8.3 billion in March 2019.

The number of transactions for the month totalled 50.8 million, up from nearly 20.7 million in the same month last year.

The volume of shares traded on the Toronto Stock Exchange for the first three months of the year was up 35.5 per cent compared with 2019, while the number of transactions was up 49 per cent.

The S&P/TSX composite plunged last month as steps taken to slow the spread of COVID-19 forced the closure of non-essential businesses and the price of oil fell as Saudi Arabia and Russia started a price war.

TMX Group says the volume of trading on all its equity marketplaces, which includes the Toronto Stock Exchange, TSX Venture Exchange, TSX Alpha Exchange and Montreal Exchange, in March was up more than 70 per cent compared with March 2019.