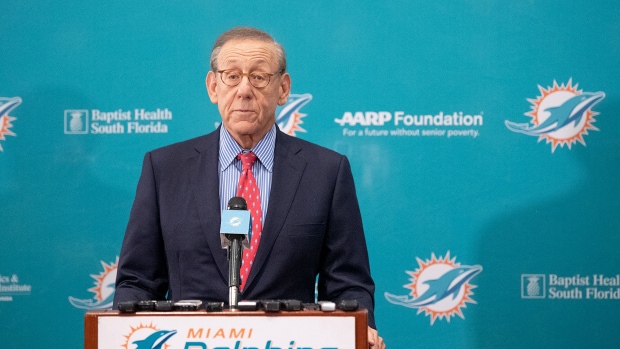 Stephen Ross, the owner of the Miami Dolphins and an investor in Equinox gyms and SoulCycle, defended his decision to hold a Donald Trump fundraiser, saying he likes to “engage directly and support the things I deeply care about.”

After reports of a planned Trump luncheon at Ross’s home in New York’s Hamptons drew boycott threats and criticism from within his own businesses, the billionaire said he engages with political leaders out of “deep concern for creating jobs and growing our country’s economy.”

“I always have been an active participant in the democratic process,” Ross, 79, said in an emailed statement. “I have known Donald Trump for 40 years, and while we agree on some issues, we strongly disagree on many others and I have never been bashful about expressing my opinions.”

A note from our CEO pic.twitter.com/UwxBWR76B0

SoulCycle Chief Executive Officer Melanie Whelan, meanwhile, sought to distance the company from Ross as calls for boycotts spread on social media. The furor was over a fundraiser where attendees will reportedly pay US$250,000 for lunch, a photo and private round-table discussion.

“We believe in diversity, inclusion and equality,” Whelan said on Twitter. “Mr. Ross is a passive investor and is not involved in the management of SoulCycle.” Equinox issued a similar statement.

Ross made much of his fortune as founder of Related Cos., the real estate behemoth. The company doesn’t disclose Ross’s interest in its properties, including Equinox and its SoulCycle unit, and big developments like New York’s Hudson Yards. Bloomberg calculates his wealth at US$9.9 billion, based on his ownership of Related’s assets, plus stakes in Equinox and SoulCycle.

🤔 You can’t have a non profit with this mission statement then open your doors to Trump. https://t.co/sNBWfEXvLn pic.twitter.com/nNkRf2wJep

Kenny Stills, a receiver for the Dolphins, said on Twitter that the fundraiser in the Hamptons was inconsistent with efforts to fight racial inequality. The billionaire has a nonprofit called the Ross Initiative in Sports for Equality with a mission of championing social justice and improving race relations.

Ross wasn’t one of the nine NFL owners that reportedly contributed to Trump’s original campaign, or his inauguration. America’s richest sports league has often been at odds with the president, including a high-profile row in 2017 over the league’s handling of players who chose to protest during the national anthem.

Just contacted @Equinox to cancel my membership after many years. Money talks, especially with these monsters. If it’s too inconvenient for u to trade one LUXURY GYM for another, then you should be ashamed. (No disrespect to the many wonderful employees at my local Equinox). Bye!

The Trump event, reported in the Washington Post, also prompted a backlash against Equinox, with comedian and actor Billy Eichner among those who said they were canceling their memberships.

Just contacted @Equinox to cancel my membership after many years. Money talks, especially with these monsters. If it’s too inconvenient for u to trade one LUXURY GYM for another, then you should be ashamed. (No disrespect to the many wonderful employees at my local Equinox). Bye!

“There are a handful of billionaires who own everything and many support Trump,” he said on Twitter. “Practically speaking, it’s probably impossible to completely avoid them. But considering Equinox’s clientele and how they’ve pandered to us, this one feels particularly hypocritical and shameful.”

In his statement, Ross said he is “and will continue to be, an outspoken champion of racial equality, inclusion, diversity, public education and environmental sustainability, and I have and will continue to support leaders on both sides of the aisle to address these challenges.”

--With assistance from Eben Novy-Williams