Generalists don’t understand this is the tightest oil market in decades: Eric Nuttall

Oil shed its gains after a bullish crude inventory report was tempered by an unseasonal slowdown in gasoline demand.

West Texas Intermediate slipped under US$110 a barrel after rising as high as US$114.05 a barrel during the session. A government report showed that US crude stocks fell as fuelmakers increased runs amid historically high refining margins. Meanwhile, gasoline demand on a four-week rolling average fell to the lowest seasonal level since 2014, with the exception of 2020.

The slowdown in gasoline demand growth could be a sign that prices are starting to impact consumers, said Rebecca Babin, senior energy trader at CIBC Private Wealth Management. However, the outlook for oil is still strong, she added. “Demand is currently below seasonal averages but the key thing for crude is that it is still growing.” 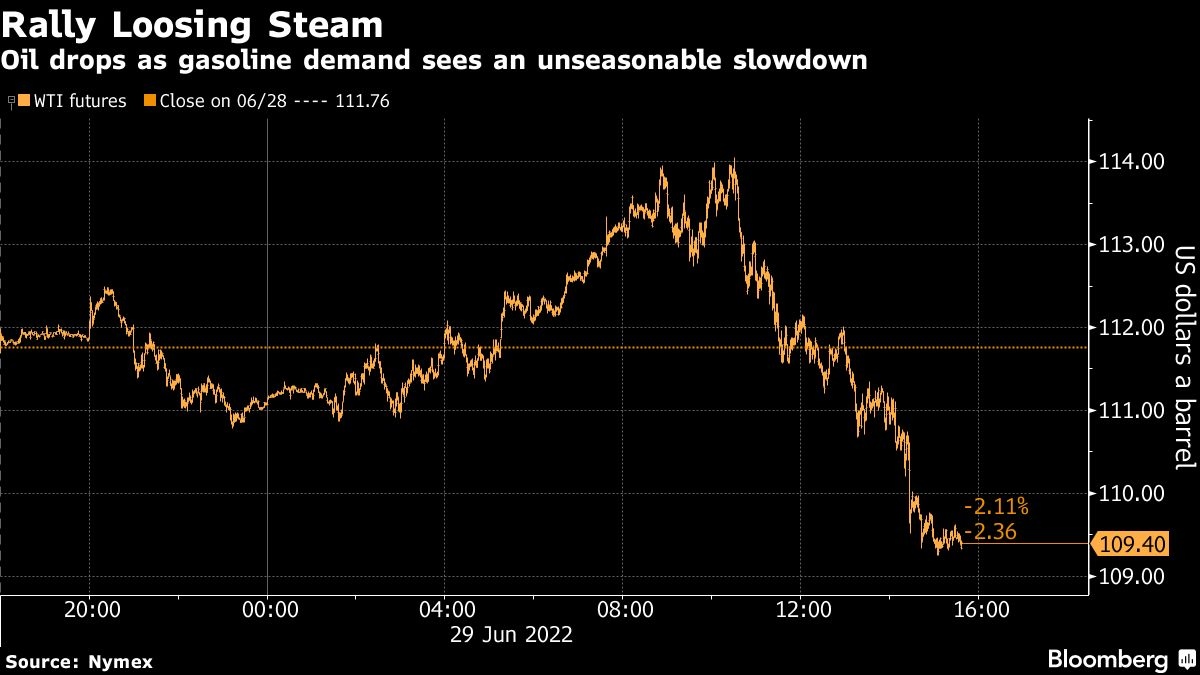 Compounding concerns over supply tightness, OPEC+ is expected to rubber-stamp another modest supply later this week, although the cartel has struggled to meet its targets this year. The US has lobbied the production group to increase output and Amos Hochstein, the State Department’s senior adviser for energy security, said the US hopes OPEC+ will institute a further production increases.

Oil is heading for the first monthly decline since November after being hit by fears of a global economic slowdown, but prices still are about 50 per cent higher this year. While fears of a global economic slowdown have weighed on futures, demand remains robust for now. US retail gasoline prices remain near record highs, causing pain for consumers. A recovery from Covid-19 and a shortage of refining capacity to make fuels continue to keep prices at record highs.

Time-spreads that help gauge market health are also flashing bullish signs as the vital North Sea market that underpins much of the world’s crude supply extended a recent surge. Dated-to-Frontline swaps, a measure of how tight North Sea supplies are jumped to their highest level on record near US$6 a barrel.

Spreads were also supported by tightening supplies at the US’s largest crude hub in Cushing, Oklahoma, where stockpiles fell to the lowest since 2014. The spread between the September and October contracts is near US$3 a barrel, as the market prices in the end of the SPR release.

The US will assess the need for further releases of emergency reserve crude after October, Amos Hochstein, the State Department’s senior adviser for energy security, said in a Bloomberg Television interview.