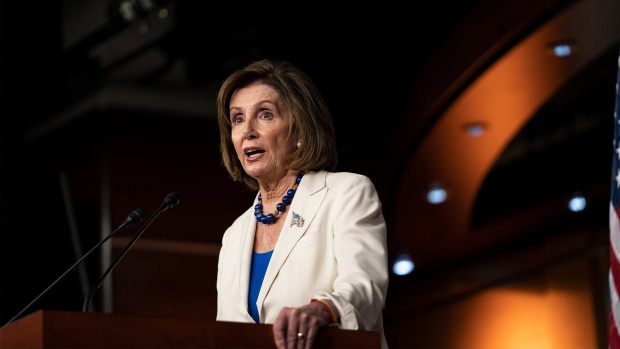 House Speaker Nancy Pelosi and Trade Representative Robert Lighthizer made progress on but failed to seal a deal Thursday on the stalled U.S. Mexico Canada free trade agreement, increasing the likelihood the deal won’t get a vote in Congress this year.

Ways and Means Committee Chairman Richard Neal, the top negotiator on the pact, said he will continue talks with Lighthizer through next week when the House is in recess to maintain momentum on the final changes Democrats are seeking. He said it is still possible to vote on the deal this year.

“The conversation was spirited and it was candid,” Neal told reporters after the meeting. “The toughest issues in bargaining are always the last ones.” Neal said of five remaining disagreements, progress was made on three.

Pelosi before the meeting cautioned that even once a deal is reached, it will still take time to write the necessary legislation and go through the steps required for a vote. She was noncommittal when asked about holding a House vote before the end of the year.

“We’ve made progress,” Pelosi said as she left the meeting with Lighthizer. “I think we are narrowing our differences.”

Passing the trade deal is President Donald Trump’s top legislative priority and would deliver to him a much-needed political win as he faces an impeachment inquiry in the House and heads into a re-election campaign next year. At the same time, it would allow Democrats to show they are capable of legislating even as they are investigating the Trump administration.

Democrats from rural swing districts are especially eager to have the deal done. Farmers have faced steep economic losses this year due to Trump’s trade war with China, although the president claims that those headwinds are in fact due to the stalled USMCA.

All House members will be up for re-election in 2020, and Democrats who won Republican-leaning districts are under pressure to deliver legislation with enough bipartisan support to become law. Pelosi is keenly aware that preserving her majority depends on these members.

Pelosi before the meeting said she is “eager to get this done,” although she said she won’t agree to a superficial deal without stronger enforcement. She said approving a deal with no mechanism to back it up, would just be “NAFTA with sugar on top.”

Pelosi said that even if the administration agrees to changes sought by Democrats, the House may not have enough time to write and vote on the legislation before the end of December. Neal said a vote is still possible this year.

Any verbal agreement would still need to be drafted into legislation, evaluated for its budget impact and considered in committee, she said. Changes in the text of the agreement would also need to approved by Mexico and Canada.

Republicans and the business community have increased pressure on Pelosi as they grow more concerned that pushing the vote into an election year will make it less likely to happen.

“She’s always close to allowing a vote. Her conference is always almost there,” Senate Majority Leader Mitch McConnell said of Pelosi on the Senate floor Wednesday. “But we’ve been almost there for months and months with no outcome in sight. Lots of talk; zero results.”