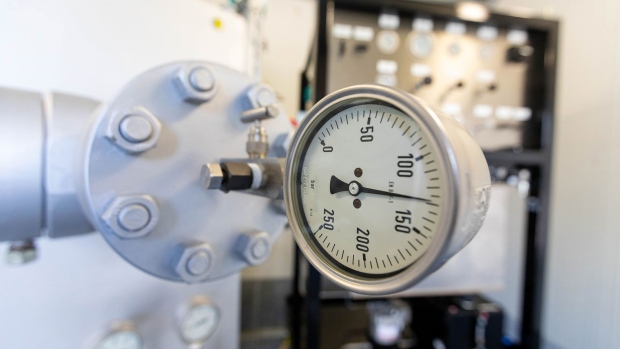 The pressure gauge of a wellhead valve at the Uniper SE Bierwang Natural Gas Storage Facility in Muhldorf, Germany, on Friday, June 10, 2022. Uniper is playing a key role in helping the government set up infrastructure to import liquified natural gas to offset Russian deliveries via pipelines. Photographer: Krisztian Bocsi/Bloomberg , Bloomberg

(Bloomberg) -- Senegal is positioning itself as an alternative source of gas for Europe as Russia cuts supplies of the fuel.

“Senegal will be able to sell its quota to Europe, especially Germany already, in the second half of 2024,” Mamadou Fall Kane, deputy permanent secretary of COZ-Petrogas, a government committee that monitors and develops oil and gas projects, and Energy adviser to President Macky Sall, said by phone Thursday from the capital, Dakar.

The war in Ukraine has shown how reliant Europe is on natural gas to produce power. Before the conflict began in February, Russia provided as much as 40% of Europe’s gas needs. Those countries are scrambling to cut deals across the Middle East and Africa amid a spike in prices as Russia reduces supplies.

European Union officials traveled to Dakar in February to meet Kane. German Chancellor Olaf Scholz followed with a visit to the the West African nation in May to pursue gas and renewable-energy projects. At that time, Kane was unable to give Scholz a clear answer on when it would be able to start supplies as the government had previously agreed to send its first gas to Asian nations, under contracts signed in 2018.

Read: Difficult to Close Global Gas Gap Despite Move Away From Russia

“A few days ago, we didn’t have any visibility as to whether or not we could supply Europe with gas before 2027,” Kane said. “Now we can say we’ll be able to reroute our cargo to Europe starting 2024.”

A clause in the sales and purchase agreement allowed Senegal to sell to other buyers, according to Kane. “This allows us to extract the maximum value of the contract and to double, or even triple, our earnings.”

Production at Senegal’s Greater Tortue Ahmeyim gas project is scheduled to start next year. The offshore field straddling the border between Senegal and Mauritania is set to produce 2.5 million tons of liquefied natural gas in the first phase, which will double to 5 million tons in the second.

Final investment decisions for phase two of the GTA project should be made by September and for the deepwater Yakaar-Teranga project later this year, Kane said. A recent European Union decision to label gas investments as climate-friendly would make it easier to attract financing, he said.

“We’re in a very good dynamic,” he said. “Institutionally our policies align with those of the European Union, as well. So all the stars are aligned.”

Kosmos Energy Ltd., which is co-developing the GTA field with BP Plc, earlier this month said phase one is 80% complete, with first gas expected in the third quarter of 2023 and first LNG at the end of next year.