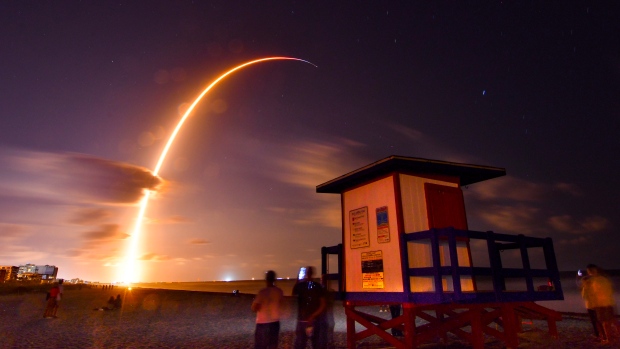 The Falcon 9 rocket and payload rumbled aloft at 10:30 p.m. local time from Cape Canaveral Air Force Station in Florida. Minutes later, SpaceX successfully recovered the Falcon 9’s first stage on a droneship in the Atlantic Ocean. The satellites are slated to begin deployment roughly 62 minutes after the launch.

The space-based internet service is an important source of funding for the Hawthorne, California-based company, Musk has said. He founded SpaceX in 2002 with the ultimate goal of enabling people to live on other planets.

“We see this as a way for SpaceX to generate revenue that can be used to develop more advanced rockets and spaceships,” Musk told journalists during a conference call last week, before a planned launch was scrapped because of high winds. “This is a key stepping stone on the way toward establishing a self-sustaining city on Mars and a base on the moon.”

SpaceX set a company record last year with 21 launches for customers. Much of the focus this year is on the first flight with humans on board. SpaceX and Boeing Co. have contracts with NASA to ferry American astronauts to the International Space Station as part of the agency’s Commercial Crew program.

SpaceX completed the Demo-1 flight of its “Crew Dragon” without humans on board in March. But in late April, the Dragon was engulfed in flames and destroyed during a test, a mishap that probably will push back the commercial crew schedule.