Suncor CEO to retire in May

CALGARY - Suncor Energy Inc. says Steve Williams will retire as chief executive after the company's annual meeting next May.

Williams, 62, joined Suncor in 2002 and took the helm of Canada's largest energy producer by market capitalization from longtime CEO Rick George when he retired in 2012.

Williams has been one of the more outspoken CEOs in the oil patch, insisting recently the company will approve no new major expansion projects until Canada's export pipeline access problem is resolved.

He has also led the way in support for environmental initiatives and was one of four energy company leaders to stand alongside Alberta Premier Rachel Notley in 2015 when she unveiled the province's sweeping climate plan, which included a growing carbon tax.

The company says Mark Little, 56, will trade in his chief operating officer title to become president effective immediately and will assume the CEO's role in May.

Little joined Suncor in 2008 and has served in several leadership roles in the company's oilsands and international and offshore operations.

“It's been a privilege to lead Suncor. I'm making this transition now, knowing that it's a good time to do so,” said Williams in a statement.

“Thanks to a sound strategy grounded in operational excellence and capital discipline, a healthy balance sheet, and an ongoing focus on sustainability and technology and innovation, I'm optimistic about Suncor's future under Mark's leadership.” 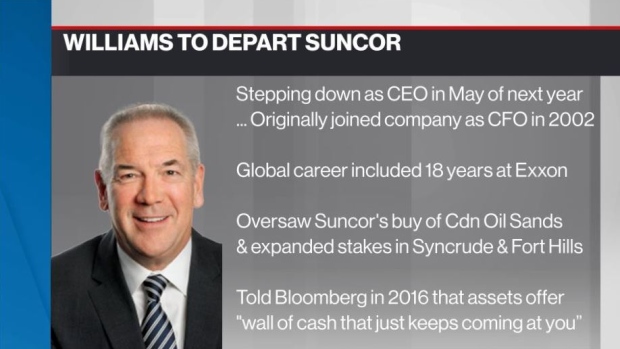