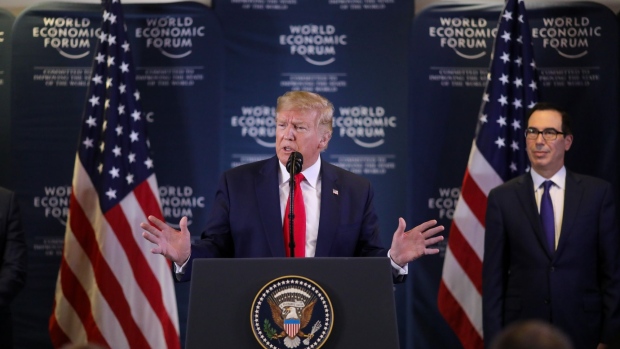 Donald Trump speaks during a news conference at the World Economic Forum in Davos on Jan. 22. Photographer: Simon Dawson/Bloomberg , Bloomberg

European automakers were left in little doubt they face a tough year after U.S. President Donald Trump renewed his threat to impose tariffs on imported cars from the region and a lobby group forecast a drop in annual sales.

Speaking at the World Economic Forum in Davos on Wednesday, Trump said the European Union is “more difficult to do business with than China,” indicating he’s about to turn his attention to renegotiating trade deals with the bloc.

Cars have been at the center of trade tensions for the past couple of years between the U.S., China and the European Union, adding to pressure on the industry. Also on Wednesday, the European Automobile Manufacturers Association forecast car registrations will likely drop two per cent  in 2020, following a 1.2 per cent  gain last year.

The new head of the lobby, Michael Manley -- who is also chief executive officer of Fiat Chrysler Automobiles -- said he thinks a trade war can be avoided.

“I think if the parties involved approach those conversations in a serious manner it will be possible, I believe, for an amicable conclusion to be reached,” he told reporters in Brussels.

The threat of U.S. tariffs weighed on automotive stocks in 2019, and carmakers warned that continued uncertainty is one of the biggest risks for this year. The European industry is also dealing with regulations aimed at lowering carbon emissions as well as heavy investment to develop electric cars.

“What we need is a degree of certainty so we can plan our business,” Manley told reporters in Brussels. “We’re a long cycle business and we need to understand what the environment will look like over a prolonged period of time.”

Europe is not the only region facing a tough 2020 for car sales. China, the world’s largest autos market, saw its second annual fall last year, with drops in 18 of the past 19 months.

A bright spot for manufacturers is the rise of electric-cars.

Battery-electric vehicle sales are expected to grow 32 per cent this year, according to BloombergNEF. Those will be vital for continued success for car companies, as the European Union has limited the amount of carbon dioxide car fleets can emit on average to 95 grams per car per kilometer driven or face steep fines.

--With assistance from Richard Bravo.