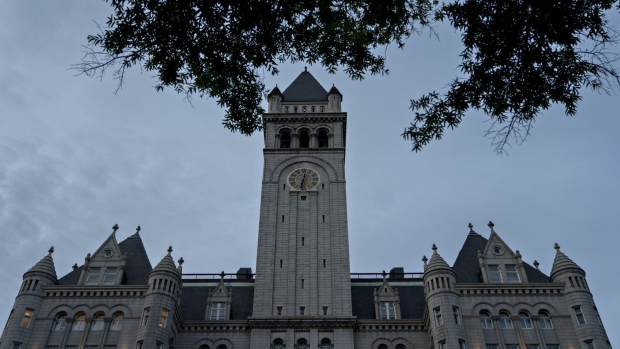 Donald Trump and his family prepare to cut the ribbon at the new Trump International Hotel on Oct. 26, 2016. , Photographer: Chip Somodevilla/Getty Images

Donald Trump’s empire has been hit hard by coronavirus closures, with revenue from his Washington and Las Vegas hotels down by more than half.

In his last financial disclosure form as president, Trump detailed the damage the pandemic has wrought, at a time when many tourism businesses are suffering from a lack of travelers. As president, the real-estate magnate resisted policies to slow the pandemic through mask-wearing, and insisted it remained safe for people to travel domestically.

His golf courses in the U.K. and Ireland saw revenue drop by roughly two-thirds, part of a 27 per cent overall decline in golfing revenue from the prior year.

Trump’s total income fell to between US$273 million and US$308 million, according to the form, which covers 2020 and the first 20 days of 2021. In his first financial disclosure in 2017, Trump reported making more than US$528.9 million over 15 1/2 months, including his first three months as president.

One bright spot in Trump’s empire is his Mar-a-Lago club in Florida, where the ex-president returned today after his final day in the White House. Revenue for the club hit US$24.2 million, up from US$21.4 million a year earlier, according to the financial disclosure. It’s one of Trump’s few properties that seems unaffected by the pandemic.

In total, Trump valued the assets from his businesses at between US$1.3 billion and US$1.7 billion. The disclosures are not exact -- federal officials give the value of their assets and income in broad ranges, and the top value is “over US$50 million.” Trump had 22 assets he listed in that range, including his Mar-a-Lago resort and the Trump International Hotel in Washington.

The form also details more than US$40,000 in gifts Trump accepted in his last year in office, including freebies from executives at Boeing Co., Apple Inc. and Ford Motor Co.

Trump is worth US$2.5 billion, down about US$500 million from when he took office, according to the Bloomberg Billionaires Index. His buildings are saddled with more than US$1 billion in debt, most of it coming due in the next three years and more than a third of it personally guaranteed.