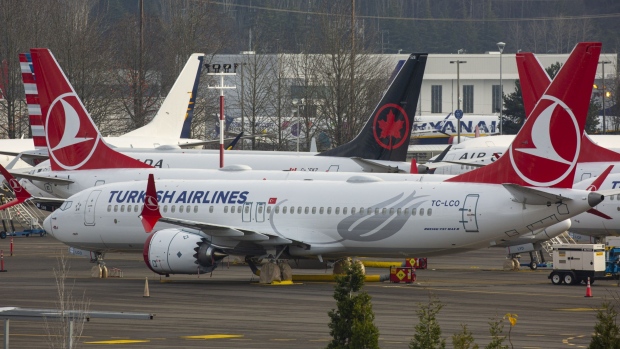 See Full Stock Page »
U.S. factory output fell in January on the production halt for Boeing Co.'s 737 Max, showing how the grounding of the troubled plane will weigh on manufacturing and the broader economy in coming months.

Manufacturing output declined 0.1 per cent from the prior month, matching projections, after a downwardly revised 0.1-per-cent gain in December, according to Federal Reserve data released Friday. Total industrial production, which also includes mines and utilities, fell 0.3 per cent as unusually warm weather held down energy output.

• While the Boeing stoppage will likely continue to hit the economy throughout the first half of the year, factory output excluding aircraft and parts rose 0.3 per cent in January, signaling some stabilization in other manufacturing sectors. But the coronavirus outbreak is also expected to weigh on supply chains and demand in the coming months.

• Production of aerospace products and parts fell 9.1 per cent in January, reflecting the 737 Max production halt. Boeing received zero orders for all aircraft in January, suggesting production will stay subdued.

• Together with consumption data, the factory output figures indicate the U.S. economy is off to a modest start this year. A separate report Friday showed that while retail sales gained in January, a narrower measure — which some analysts see as a better gauge of underlying demand — was sluggish.

• Utility output declined four per cent from the prior month while mining production increased 1.2 per cent. Production of motor vehicles and parts increased 2.4 per cent for the second gain in three months; excluding cars, manufacturing fell 0.3 per cent after a 0.5-per-cent increase in December.

• Sectors with declines in January included machinery and consumer goods, while computer and electronic products along with fabricated metal gear showed gains.

• The Fed's monthly data are volatile and often get revised. Manufacturing makes up three-fourths of total industrial production and about 11 per cent of the U.S. economy.