Bank of Canada continues to buck the trend

The Bank of Canada laid out a staunch defence of its decision to buck the global easing trend, citing a resilience in the nation’s economy that is allowing it to “chart its own course in monetary policy.”

In a speech a day after a rate decision in which the Bank of Canada kept its policy rate unchanged for a ninth straight meeting, Deputy Governor Timothy Lane said policy-makers believe Canada’s economy is near capacity and that recent developments — both domestically and globally — have bolstered their confidence growth is poised to accelerate over the next couple of years. That’s despite “enduring” global uncertainty.

“Overall, the tone of developments in recent weeks gives us more confidence in the outlook for growth and inflation that we set out back in October,” Lane said, according to a prepared copy of his speech in Ottawa. “Our overall assessment is that the Canadian economy is near capacity.”

The central bank, led by Governor Stephen Poloz, has been under pressure to rationalize its decision to hold off from easing while the Federal Reserve and other central banks have cut — an outlier status that has propped up the Canadian dollar. The prolonged pause has left Canada with the highest policy rate among advanced economies. 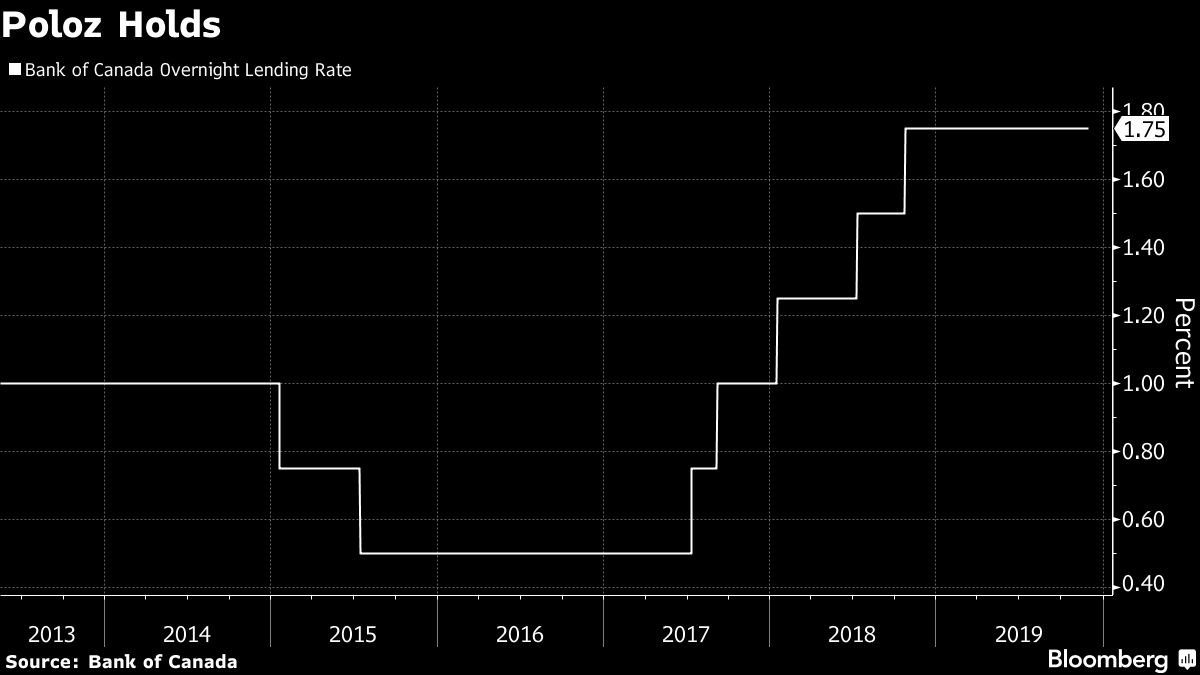 The speech is in line with an upbeat tone in the rate statement Wednesday that indicated the Bank of Canada is comfortable in its current wait-and-see stance, driving a 0.7 per cent gain in the Canadian dollar Wednesday. The currency extended gains on Thursday, and was up 0.2 per cet to $1.3172 per U.S. dollar at 8:07 a.m. Toronto time, as investors pared bets on a rate cut from the Bank of Canada. Swaps trading suggest odds of a move over the next week have fallen to below 50 per cent.

Lane cited three reasons for why Canada has not cut rates in the face of Fed cuts: Inflation and its outlook remain on target, Canada’s policy rate was lower to begin with, and household debt levels are higher, placing a constraint on policy makers.

“Many people wonder why we have held our key policy rate steady over the past year while many other central banks have lowered their rates,” Lane asked. “In sum, there is no reason for the Bank of Canada to move in step with the Fed.”

“On the contrary, the experience of the past decade shows that Canada and the United States have followed different roads, reflecting differences in our economic conditions,” he said.

Lane’s speech is what the central bank calls its Economic Progress Report, in which it aims to provide insight into deliberations following the rate decisions that aren’t accompanied by new forecasts.

Much of the speech was dedicated to showing how Canada and U.S. policy has a long history of divergence. Still, Lane said the current divergence “is not as stark as it’s sometimes portrayed.”

And while the global trade uncertainty has already done damage to the nation’s economy and remains a serious risk, Canada continues to have “notable” strengths — and these sources of growth are manifest in a labor market showing signs of tightening, Lane said.

“It is because of this strength amid the turmoil that we say Canada is resilient, although it is not immune,” Lane said, adding this strength is what is allowing the central bank to chart its own course on policy.

Lane cited recent third-quarter economic data that while confirming a slowdown, also seem to show the weakening will be temporary. This includes stronger than expected business investment in Canada and a stabilizing global economy. That’s bolstering the central bank’s confidence in its forecast the economy is poised to rebound.

“So I and my colleagues on Governing Council decided that the current setting of the policy interest rate remains appropriate to keep inflation at our two per cent target,” Lane said.