Canada’s biggest banks are signaling that financial issues from the COVID-19 crisis are largely in the rear-view mirror in North America -- and earlier than analysts had expected.

After a year of stockpiling record amounts of capital to protect against a wave of loan defaults, Royal Bank of Canada and Toronto-Dominion Bank -- the country’s two largest banks -- reversed course last quarter. Toronto-Dominion on Thursday reported a surprise $377 million (US$312 million) release of provisions for credit losses for its fiscal second quarter, while Royal Bank released $96 million. Analysts had projected both lenders would continue setting aside capital to absorb potentially soured loans.

With vaccination campaigns putting economic reopenings in reach in Canada and the U.S., strong housing markets fueling mortgage lending, and surging equity markets supporting capital-markets and wealth-management businesses, Toronto-Dominion and Royal Bank are asserting they have more than enough capital to handle any bumps along the road to recovery.

Even after reporting smaller set-asides than analysts expected in the fiscal first quarter, bank executives still struck a cautious tone on their preparations for potential credit losses, leading many analysts to expect reserve releases wouldn’t begin until the second half of the year.

“They definitely are a lot more positive than they were three months ago,” Paul Gulberg, an analyst at Bloomberg Intelligence, said in an interview Thursday. “It’s a combination of vaccines and a stronger economy -- not just in the U.S. and Canada -- but an improving economy globally.”

While the reserve releases were the banks’ first in data going back to 2012, key measures of capital on hand for Royal Bank and Toronto-Dominion continued to rise. Royal Bank’s common equity tier 1 capital ratio increased to 12.8 per cent in the three months through April from 12.5 per cent in the first quarter. Toronto-Dominion’s CET1 rose to 14.2 per cent from 13.6 per cent. 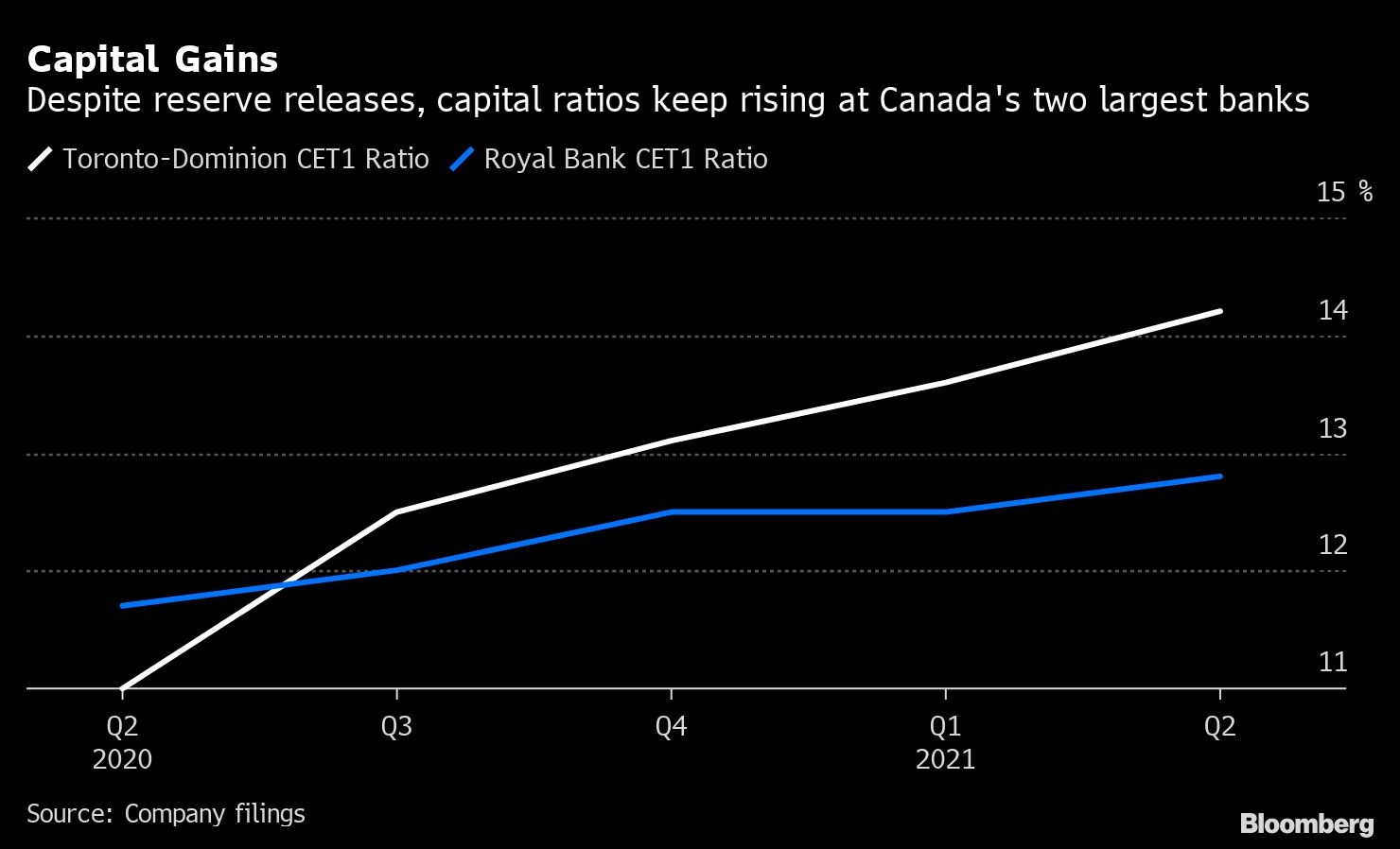 Those rising measures may put pressure on Canada’s bank regulator, the Office of the Superintendent of Financial Institutions, to allow the country’s banks to resume share buybacks and dividend increases. The U.S. Federal Reserve allowed American banks to resume buybacks last year.

“OSFI should be looking into it,” Gulberg said. “Dividend increases, which have been locked for over a year, and some buybacks could bring capital ratios back to more normal, more palatable levels for the banks.”

The comeback from the pandemic made its way to banks’ bottom lines. At Royal Bank, net income rose 171 per cent to $4.02 billion in the second quarter. Excluding some items, profit was $2.79 a share, topping analysts’ $2.51 average estimate. Toronto-Dominion’s net income more than doubled to $3.7 billion, and adjusted earnings totaled $2.04 a share, beating analysts’ $1.76 estimate.

The rebound in earnings is a big part of why Toronto-Dominion was able to release some of its provisions, and progress on vaccine rollouts and healthy economic-growth forecasts leave the bank poised for continued strong performance in the U.S. and Canada, Chief Financial Officer Riaz Ahmed said.

“We’re very encouraged by those developments in Canada, and some of the announcements that are coming out of the various provinces about what the next three to four months will look like,” Ahmed said in an interview.

While the high level of deposits that have built up over the past year present challenges for growth in credit-card balances and commercial loans, a number of factors are lining up that could overcome those headwinds, Royal Bank Chief Financial Officer Rod Bolger said.

“You have strong GDP growth, strong customer demand, building confidence levels and also a desire to work through some of the global supply-chain issues and potentially build inventory where many places have no inventory,” Bolger said in a phone interview. “Those should be constructive for overall loan growth.”

Canadian Imperial Bank of Commerce also reported second-quarter results Thursday. Its net income quadrupled to $1.65 billion, and adjusted profit was $3.59 a share, higher than the $3 average estimate. CIBC shares rose as much as in 3.6 per cent in Toronto trading, its biggest intraday gain since November. Royal Bank advanced 1.4 per cent as of 3:22 p.m., and Toronto-Dominion slipped 2.1 per cent.

CIBC’s results were driven by gains in its Canadian banking franchise, with increases in mortgages and deposits. CFO Hratch Panossian said revitalizing the Canadian consumer business has been the No. 1 priority for the bank.

“There has been lots of management attention, investment and focus that has gone into that,” he said in an interview. “We’re pleased to see some of that paying dividends.”