Canada’s hot housing market is showing early signs of a slowdown that may soften the industry’s contribution to the economy -- but not enough to be a major concern, according to one bank economist.

“Now that Canadians are leaving their homes more often, demand for housing is cooling off after a period of historic strength,” Canadian Imperial Bank of Commerce economist Royce Mendes said Friday in a report. “As a result, we do expect this component of GDP to come back down to earth.”

Potential moderation of the housing boom might not hurt the economy as much as people think because home prices aren’t factored into residential investment and employment in the sector isn’t likely to take a hit, Mendes said. Business investment -- a key component of gross domestic product that lagged during the pandemic -- is likely to pick up in the near term as confidence from vaccine reopenings continues to improve, he said. 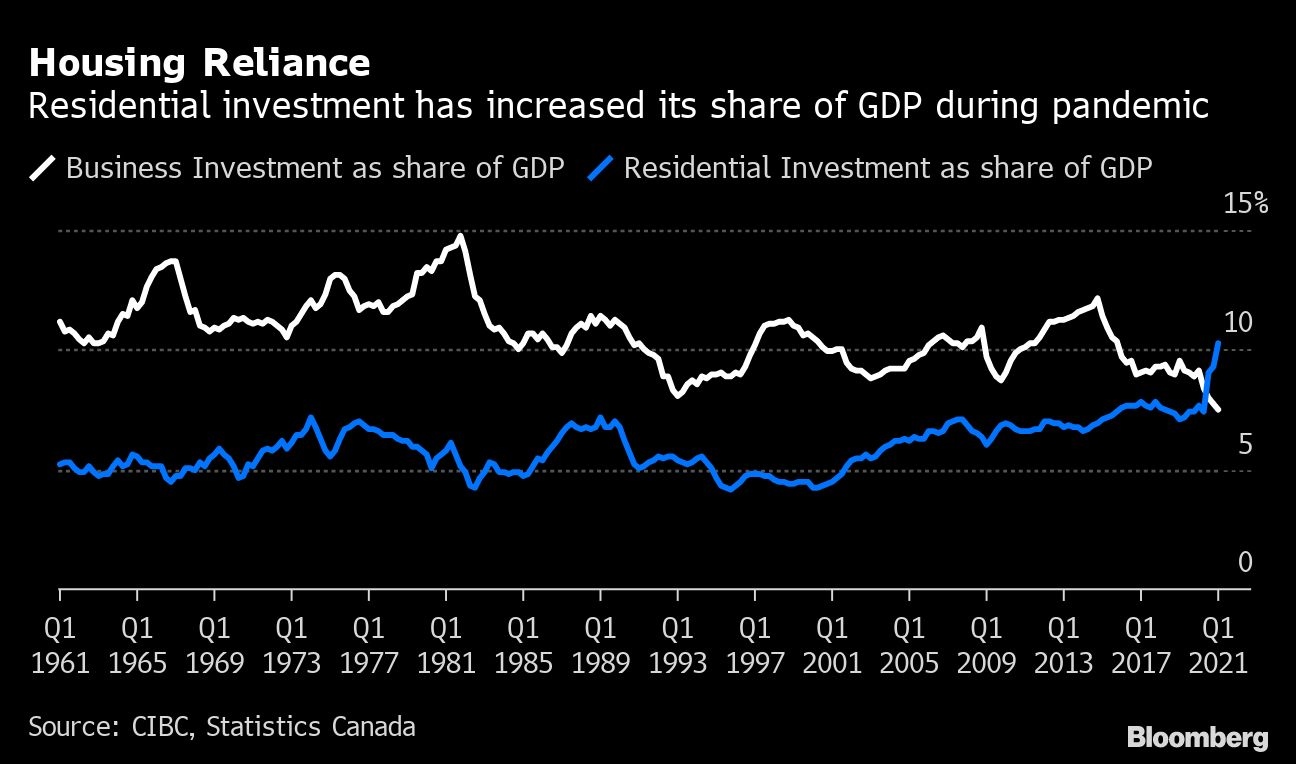 COVID-19 lockdowns prompted an exodus of Canadians from apartments and condos in city centers to homes with more space, typically further from urban areas. Low interest rates, combined with demand for larger living spaces, boosted prices and sales. With those subsiding from elevated levels, economists and policymakers have expressed concern around the financial and economic implications of a potential plunge in the market.

“So, while the cooling in market activity will dent the incomes of agents and the profits of brokers, it probably won’t meaningfully delay a return to full employment,” he said.

Mendes said there’s not much to fret about from a macroeconomic standpoint, however a sharp collapse in prices is still a financial stability concern -- particularly for those homeowners who take on higher debt to buy property.

As the housing market cools and price growth slows, consumers will have more money to use on goods and services unrelated to real estate, Mendes said. Also, as vaccine rollouts continue, businesses will become more confident in the sustainability of the recovery and therefore more willing to make major investments in machinery and equipment, among other things. Canada’s vaccination rate has already surpassed that of the U.S., with more than 53 per cent of its total population fully vaccinated.

“The reopening that is underway also seems to be coinciding with a slowdown in other components of residential investment,” Mendes wrote. “But, by that same token, companies not doing business in the housing market might also feel more confident making investments rather than stockpiling cash, given that vaccinations have reduced the likelihood of another round of harsh shutdowns.”