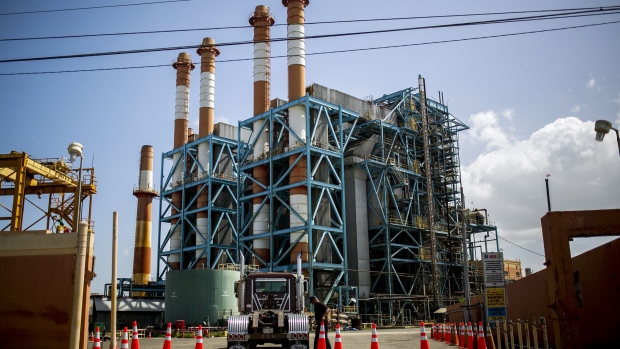 A driver moves safety cones blocking an exit at the Puerto Rico Electric Power Authority (PREPA) Palo Seco plant in Palo Seco, Toa Baja, Puerto Rico, on Thursday, Oct. 19, 2017. For longer than most can remember, Puerto Ricans have paid some of the highest energy costs in the U.S. to a notoriously unreliable utility that neglected their grid for years and runs fossil-fuel plants that may be damaging their lungs. A month after Hurricane Maria devastated the island, power lines still lay slack along roads, utility poles are snapped clean in half, and most Puerto Ricans remain in the dark. , Bloomberg

(Bloomberg) -- Puerto Rico’s bankrupt public electric utility, which powers most of the island, faces a Dec. 1 deadline to file a debt-cutting proposal to the court, a time limit that could prove a turning point in its five-year workout.

While the commonwealth ended its record bankruptcy in March, Puerto Rico’s Electric Power Authority, called Prepa, is still going through court-ordered mediation with bondholders and insurance companies to reach a new restructuring deal after Governor Pedro Pierluisi earlier this year ripped up a prior accord.

Prepa is trying to reduce about $9 billion of debt at the same time that it needs to rehabilitate a fragile and antiquated grid that leaves residents in the dark even during good weather. Luma Energy, a US-Canadian consortium, has been operating the grid since June 2021 under a temporary deal that’s set to expire Nov. 30.

Prepa’s been in bankruptcy since 2017 and US District Court Judge Laura Taylor Swain is eager to finish the workout by June. During a Nov. 2 court hearing, Swain signaled that she may be inclined to dismiss the case. Swain warned that if Puerto Rico’s financial oversight board -- which is managing Prepa’s bankruptcy -- failed to submit a confirmable debt proposal by Dec. 1, “every possible way of reacting to that will be on the table.”

Martin Bienenstock, a lawyer for the board, said during the Nov. 2 hearing that it will be possible for the board to file such a proposal by the deadline. Judge Shelley C. Chapman, former US Bankruptcy Judge for the Southern District of New York and lead mediator in the talks, disagreed and said she was concerned about meeting the deadline.

Dismissing the case would end Prepa’s bankruptcy protection, and creditors who are owed billions of dollars would probably file suit against the utility. The court may install a receiver that could raise rates to make debt payments.

“They’re in a difficult position right now,” Sergio Marxuach, policy director at the Center for a New Economy, a Puerto Rico-based think tank, said about the oversight board’s Dec. 1 deadline. “The judge hasn’t said it this way, but I think her patience is running low.”

Prepa’s restructuring involves cutting its obligations deep enough so that island residents -- 44% of whom live in poverty and suffer from chronic blackouts -- are able to repay the debt through their utility bills while at the same time compensating creditors, some of whom haven’t been paid in eight years.

“It is a very difficult deal to put together because it implies the balance between the bondholders and ultimately the rate payers, who are the people who will end up paying for everything,” Carlos Vázquez, the chief financial officer at Popular Inc., which includes the island’s largest bank, said of the bankruptcy deal. “This is the biggest piece left of the government restructuring and completing it is expected to accelerate the implementation, the redesign, and the reconstruction of the electrical system.”

Striking a new debt deal is difficult because the parties will also begin litigating how much of Prepa’s revenue bondholders have a claim to. Absent a new debt agreement, the oversight board must file a proposal by Dec. 1 with different restructuring scenarios that reflect the various potential outcomes of the litigation.

Puerto Rico’s economy has been in the doldrums for years, as its manufacturing base stagnated and the population in decline. And there’s no consensus about where future growth will come from, Vázquez said.

But it’s clear that reliable electricity will play a major role in whatever comes next, as some $12 billion in federal funds earmarked to rebuild the electricity sector will only prop up the economy in the short term.

The International Monetary Fund expects Puerto Rico’s economy will grow 4.8% this year -- largely due to federal funding -- and then stay almost flat in 2023 before resuming its downward trajectory in 2024.

“We need to fix the electricity’s cost problem here in the island,” Marxuach said. “Otherwise, it’s going to be very difficult to get any growth out of the economy, beyond what we will get from federal transfers, which at some point are going to run out.”

Luma was slated to begin a 15-year, $1.5 billion contract on Thursday under the presumption that Prepa would be out of bankruptcy. But with the process ongoing, Governor Pierluisi has floated the idea of signing another temporary deal. To complicate matters, some lawmakers argue the prolonged bankruptcy opens the door to cancel the Luma contract altogether. Many on the island are frustrated with the private operator as blackouts continue more than a year after the company took over the grid.

Despite the legislative push and frequent anti-Luma protests, Pierluisi has defended the contract as the best way to accelerate the island’s recovery.

“It’s crazy to be pushing the agenda to cancel the Luma contract,” Pierluisi told local media on Nov. 15. Luma is already working on dozens of federally-funded projects and ousting the company would delay those initiatives even more, he said.

“The way to keep blackouts from happening is to rebuild the grid and improve our power generators,” Pierluisi said. “And Luma is playing a key role in that.”