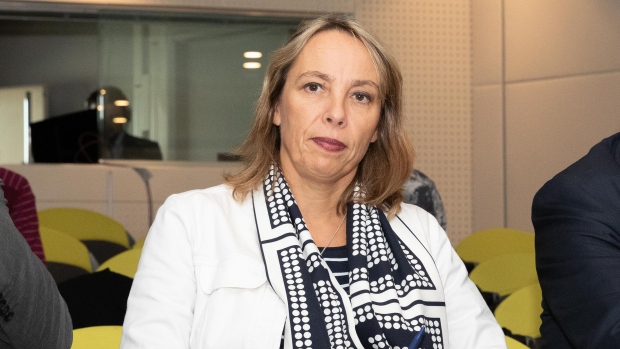 Clotilde Delbos, interim chief executive officer of Renault SA, waits ahead of a news conference at the automaker's headquarters in the Boulogne Billancourt district of Paris, France, Oct. 11, 2019. Bloomberg/Christophe Morin

Within a week of taking the helm, Renault SA interim Chief Executive Officer Clotilde Delbos called into question the strategic road map meant to carry the French carmaker through 2022.

In a video address to employees Tuesday, Delbos said Renault will review the plan because the market has changed since it was unveiled two years ago.

“Unfortunately the situation hasn’t improved during the summer and we need to put Renault back on track,” she said in the session viewed by Bloomberg News. “We need to adjust the strategy.”

Delbos isn’t wasting any time after being named temporary CEO on Friday following the board’s dramatic ouster of Thierry Bollore. By putting the six-year “Drive the Future” strategy under review, she’s taken on part of the legacy of fallen leader Carlos Ghosn. At the same time, she may have burnished her own credentials as a contender to stay on in the top job.

“We need to make some choices,” Delbos said, pointing to Renault’s negative cash flow in the first six months of the year and relatively high spending on research and development and investment. She also called for greater honesty and transparency within the company.

A spokeswoman for Renault declined to comment on internal company communication.

Delbos told employees the plan might be too tall an order in the midst of a downturn in the global auto market. She was flanked by her two deputies, Jose-Vicente de Los Mozos and Oliver Murguet.

Renault took a hit in the first half of 2019 from Nissan’s poor results and a slowdown in emerging markets like Turkey and Argentina. The French automaker owns 43 per cent of the Japanese company, which is smarting from slumping U.S. sales and aging vehicle models.

While Renault cut its revenue target for this year, it stuck to its profit outlook. Delbos, who is chief financial officer, is readying to publish third-quarter revenue Oct. 25. MainFirst analyst Pierre-Yves Quemener expects the number to be marginally down at 11.4 billion euros (US$12.7 billion) due to lower European and Renault-brand sales.

Delbos brushed aside the question of whether she wanted to remain CEO at a press conference on Friday. At least one headhunter was hired to conduct the search, which is focusing on candidates from outside the company, according to a person familiar with the matter.

Since Ghosn’s arrest in Tokyo last November on allegations of financial crimes — which he has denied — Renault and Nissan’s alliance has nearly come unraveled. Renault Chairman Jean-Dominique Senard has pushed for a merger Nissan didn’t want, and then pursued talks to combine with Fiat Chrysler Automobiles NV without telling its partner. Those talks collapsed in June.

Delbos reiterated Senard’s stance that the Franco-Japanese alliance needs to be fixed before any combination with Fiat could be rekindled.

“If there is a way to revive it, of course we would be interested, but first we need to take care of ourselves and the alliance,” she said.