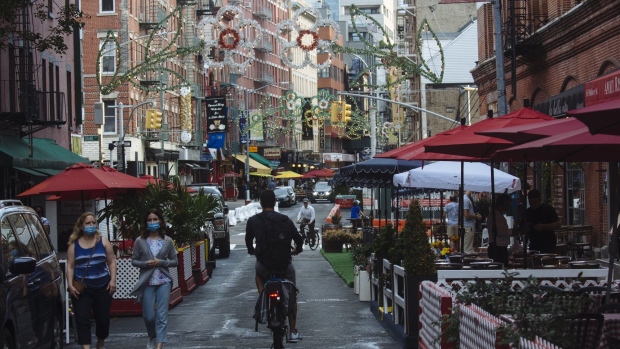 U.S. job openings unexpectedly increased in May as state economies stirred to life and businesses looked to hire anew.

The number of available positions rose to 5.4 million during the month from 5 million in April, according to the Labor Department’s Job Openings and Labor Turnover Survey, or JOLTS, released Tuesday.

The median forecast in a Bloomberg survey of economists called for 4.5 million openings. Job openings that involve workers recalled from layoffs or positions that are only offered internally are not counted in the figure.

Separations, which include layoffs and quits, plummeted by 5.83 million in May. The rate of layoffs and discharges dropped to 1.4 per cent from 5.9 per cent in April and closer to the pre-pandemic rate of 1.2 per cent.

In a jobs market where millions are still out of work, the quits rate, which measures voluntary job leavers as a share of total employment, advanced to 1.6 per cent from a nine-year low of 1.4 per cent.

At the start of the year, when the jobs market was at its best in decades, the quits rate was near the highest level in history.

The JOLTS report illustrates the dichotomy of a jobs market defined by churn. Employers, on net, are adding workers to payrolls, as evidenced by two straight record monthly increases in May and June, according to the agency’s monthly jobs data.

Yet with demand in many industries only gradually building, many workers continue to get caught up in the economic fallout of the pandemic and the recession it spurred.

The number of hires, which does include rehired employees, surged a record 2.44 million to an all-time high of 6.5 million. The hires rate jumped to an unprecedented 4.9 per cent from 3.1 per cent.

Finding work remains incredibly challenging for the jobless. There were 3.9 unemployed workers competing for every job opening in May. That underscores the current slack in the labor market and stands in stark contrast to a two-year trend in which vacancies exceeded the number of unemployed.

The JOLTS data lag behind the monthly employment report by a month, but it offers a level of detail not available in the jobs report. However, the two are not directly comparable across all categories.

For employment, the reference period is the pay period that includes the 12th of the month -- the same as the payroll survey in the jobs report -- but for job openings it’s the last business day of the month and for hires and separations, it’s the entire calendar month.