A few blocks from Grosvenor Square in Mayfair, 46 Park Lane resembles a private club with wood-paneled walls and an ornate fireplace dating back to Britain’s Victorian era.

But down a flight of stairs is one of the most secure rooms in London. Built by IBV International Vaults, the steel-walled stronghold is scheduled to open next month and will cater to billionaires looking for a place to stash their most prized possessions.

“We’re getting calls every week about a room available for 2.5 million pounds (US$3.2 million) a year,” said Sean Hoey, managing director of IBV London, referring to an apartment-size space. The firm, which also has 550 safe-deposit boxes on site and room for about 450 more, is betting on London’s reputation as a “safe haven,” even with Brexit.

This will be IBV’s sixth location, and it’s hardly the only such firm fielding queries from the wealthy. From London to Switzerland to parts of the U.S., the rich are looking to store precious metals, cash and cryptocurrency. For some, it’s the threat of a global recession. Others are avoiding bank deposits as negative interest rates force lenders to charge for holding cash. Many are concerned about natural disasters.

Hedge fund titan Ray Dalio captured the anxiety last month when he warned the global economy is under threat from an explosive mix of ineffective monetary policy, a widening wealth gap and climate change. A majority of wealthy investors are stockpiling cash in anticipation of a sharp market drop before the end of next year, according to a survey of clients from UBS Global Wealth Management.

“We’ve seen extraordinary demand for safe-deposit boxes ever since we started offering them in 2015, and that demand has really gone up since the late summer,” said Ludwig Karl, a spokesman for Swiss Gold Safe Ltd., which operates high-security alpine vaults. “Most people say they are planning for difficult economic circumstances.” 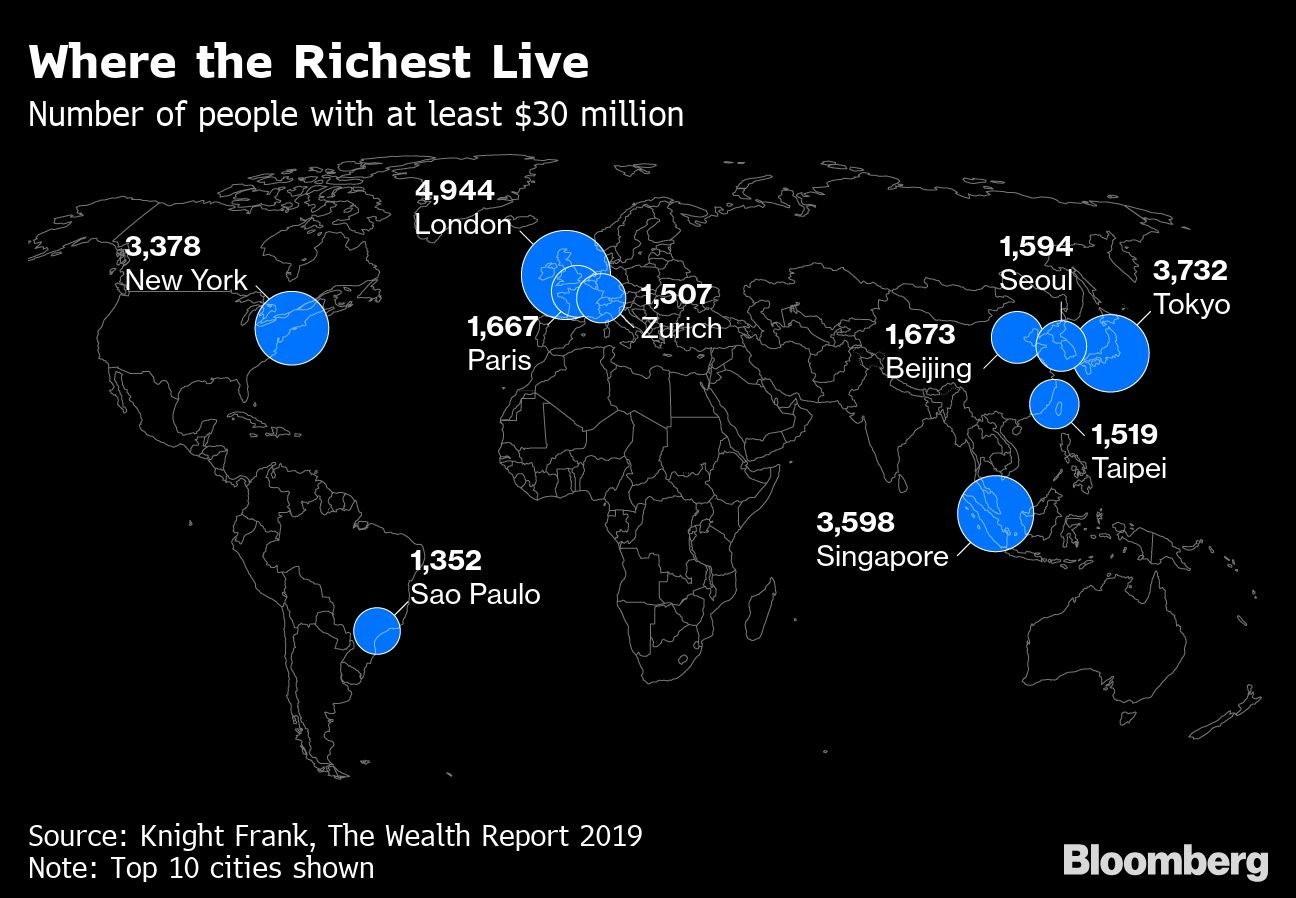 It’s a similar story for Sincona Trading AG, a precious-metals dealer with more than 1,000 safe-deposit boxes for rent in central Zurich. It had scores of empty boxes three years ago, but now it’s renting about five a day, said Benoit Schoeni, a managing director.

“There has been an extreme demand,” he said. “It won’t take too long until we’re full up.”

Safe-deposit boxes can range from a few centimeters in height to the size of a kitchen cabinet. Another option are free ports -- warehouses in tax-free zones such as Singapore, Geneva and Delaware favored for storing art, but which typically limit the amount of time that pieces can be held.

There are more than 25 million safe-deposit boxes by some estimates in the U.S. alone. They can be used for the mundane to the exotic. A private collector held the Crown of the Andes, made with 5.3 pounds of gold and more than 400 emeralds, in a Citibank box before its sale four years ago to the Metropolitan Museum of Art. Still, for many banks, they’re no longer a core offering.

The amount of space they require is one deterrent. That’s especially the case in London, home to the world’s largest population of wealthy individuals, according to real estate broker Knight Frank. In the city center, few places have secure storage facilities as large as IBV’s on Park Lane, where customers can also purchase gold coins from across the globe.

In the U.S., safe-deposit boxes also have largely fallen out of favor as banks close branches and opt not to install them in new ones. Demand has waned in recent years, according to JPMorgan Chase & Co. and Bank of America Corp., the nation’s two largest lenders.

“Much of the decline can be attributed to clients opting to store documents online, especially younger clients,” said Bank of America spokesman Don Vecchiarello.

But there’s revived interest as fears of weather disasters and wildfires have prompted more people to secure their valuables, said Jerry Pluard, founder of Safe Deposit Box Insurance Coverage. The boxes are also an option for cannabis businesses that are locked out of the U.S. banking system because marijuana remains illegal at the federal level, he said.

Some Swiss firms are also seeing demand driven by central bank policy. Negative interest rates have left Switzerland’s banks caught between the prospect of losing money to hold client deposits and imposing fees that could chase customers away.

UBS Group AG, the world’s biggest wealth manager, and rival Credit Suisse Group AG announced plans this year to expand measures for charging rich clients for holding excess cash. To some, these extra costs have made the safe-deposit box a viable alternative. A spokeswoman for UBS’s Switzerland bank, which operates almost 250,000 safe-deposit boxes nationwide, said demand from clients has declined in recent years.

“The storage cost for cash is cheaper than negative interest rates,” said Swiss Gold Safe’s Karl. The firm offers six box sizes, with the largest renting for 4,039 Swiss francs (US$4,079) a year. “Cash storage has become a strong business for us.”

Some bankers said the desire for safe-deposit boxes makes little sense. To avoid charges on their accounts, the wealthy can spread their cash across multiple banks. Clients also need to buy insurance in case something happens to the money, such as a fire.

The proliferation of nonbanks providing safe-deposit boxes has prompted some Swiss lawmakers to question whether they’re providing a safe haven for wrongdoing such as money laundering, noting they don’t face the same level of scrutiny and regulatory oversight as traditional banks.

Storing large sums of cash in safe-deposit boxes demands a checklist of tasks. Those include arranging transport of the money and keeping detailed records of its location to avoid raising suspicions over money laundering if the cash ever returns to a bank account. Moreover, failing to strictly adhere to a safe-deposit firm’s protocols may result in being rejected as a customer.

“The even bigger issue is getting the cash back into your account,” said Felix Brill, chief investment officer of Liechtenstein-based VP Bank, which manages about $50 billion of assets and offers some safe-deposit boxes. Still, “no one likes to pay negative interest rates. Everyone looks for alternatives.”

In 2015, burglars drilled through the wall of an underground vault in London, making off with $20 million of jewelry. A year earlier, a customer of a Wells Fargo & Co. branch in Highland Park, New Jersey, lost millions of dollars of rare watches that had been stored in a safe-deposit box, the New York Times reported in July.

Ironically, heists and scandals can boost other firms offering safe-deposit boxes as the rich hunt even more secure places to stash their prized possessions.

Christopher Barrow, chief executive officer of London-based Metropolitan Safe Deposits, said his company spent more than US$3 million to build a facility that opened this year in southwest London.

“Hatton Garden was a classic case,” said Barrow, whose firm has more than 15,000 safe-deposit boxes in central London alone. “There was a flight to quality on the back of it.”

--With assistance from Patrick Winters and Marion Halftermeyer.