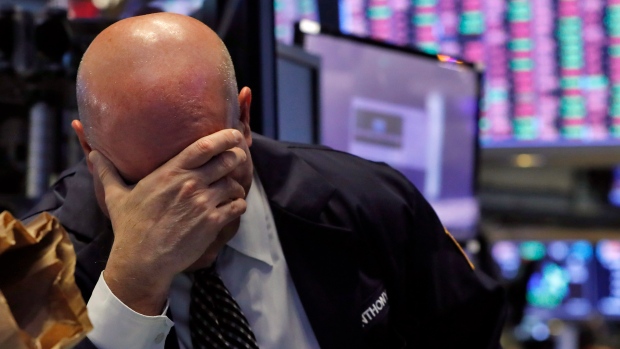 A trader has his head in his hand on the floor of the New York Stock Exchange, Thursday, March 12, 2020. , The Canadian Press

The U.S. should  temporarily close the nation's financial markets, maybe for a week or more, just as we did in the aftermath of the terrorist attacks of Sept. 11.

We're quickly realizing just how drastically daily life is about to change, at least for a few weeks. We've seen similar dramatic disruptions in China, South Korea, Italy and other European countries as they curtail social activities to slow the spread of the coronavirus.

A major challenge is helping the public understand the severity of the problem we face and getting people to take these steps. This is hard for the public to understand because of how unlikely it is that most Americans personally have the virus or know someone who does, even if the number of confirmed cases so far is understated by a factor of 10. But we've seen in Italy just how quickly that can change, as that country went from 79 confirmed cases to more than 10,000 in just three weeks. To prevent the U.S. health-care system from being overwhelmed in the next few weeks, it's important that America take radical mitigation steps today.

Closing important institutions sends a critical signal to the public about what sorts of changes to their own behavior they should make. We've already seen the National Basketball Association suspend its season, the cancellation of many large events -- even the U.S. Capitol building is being closed to the public until April 1. Corporations are adopting work-from-home policies to the extent that they can. Colleges and universities are shifting to online-only instruction and closing campuses. Cruise-line operators are suspending service for 60 days.

This would entail the need for a significant policy response from the federal government, including widespread virus testing at no cost to the public, and hundreds of billions of dollars of aid in the form of cash handouts or loans to workers, households and businesses.

But while we do that, we also should close financial markets. Credit conditions and liquidity have deteriorated rapidly in the past few weeks, and investors are trying to operate with even less near-term clarity than they had during the depths of the 2008 financial crisis. How should stocks and bonds trade if everyone's going to be hunkered down for a few weeks except for going to the grocery store or hospital? Additionally, with volatility this high, speculation about possible government stimulus and rescue efforts raise the risk of significant amounts of insider trading and market manipulation. Better to bring things to a halt for a brief period so we can focus on the policy response, making sure families and individuals are healthy and safe. That seems like the only realistic way of preventing the panic from spiraling out of control.