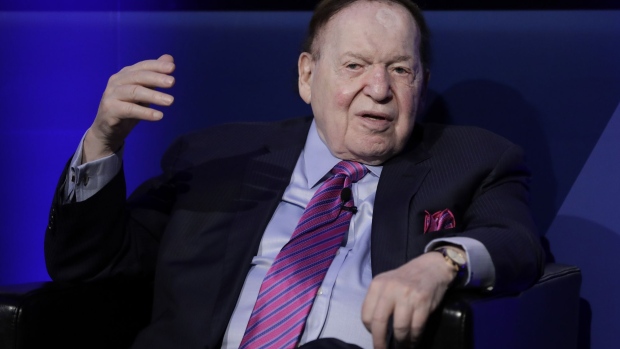 Sheldon Adelson, who built the largest casino company in the world and used his wealth to support Republican candidates and groups, has died. He was 87.

A Boston cabdriver’s son, Adelson made his first fortune in trade shows, founding what would become the computer industry’s largest event, Comdex, and selling it to Japan’s SoftBank Group Corp. for about US$800 million in 1995. He plowed the profits into casinos, first in Las Vegas and then in Asia where he helped turn the former Portuguese colony of Macau into the world’s biggest gambling market.

Adelson’s wealth was derived mostly from his majority stake in Las Vegas Sands, which he founded. The company, with revenue of US$13.7 billion in 2019, operates a convention center and casinos in Las Vegas along with gambling resorts in Macau and Singapore. Adelson, who was chairman and chief executive officer, controlled more than half of the company’s shares.

His net worth was US$33.4 billion, according to the Bloomberg Billionaires Index.

The company confirmed in 2020 that Adelson was considering selling his Las Vegas properties if the price he could get for them was high enough. The coronavirus pandemic caused a steep drop in business at casinos all over the world, but especially in China. Adelson told investors, however, that he was committed to investing billions of dollars overseas.

“We remain steadfast in my beliefs that Macao has the potential to become one of the greatest business and leisure tourism destinations in the world,” Adelson said on a conference call in October 2020.

In 1989, Adelson and his partners bought the former Rat Pack hangout, the Sands Hotel and Casino in Las Vegas, with an eye toward building a convention center to host Comdex. A decade later, he demolished the Sands and opened the US$1.5 billion Venetian hotel on the site, inspired by a honeymoon to Italy that Adelson took with his second wife, the former Miriam Ochshorn.

“Sheldon was the love of my life,” Miriam Adelson said in a statement Tuesday. “He was my partner in romance, philanthropy, political activism and enterprise. He was my soulmate. To me -- as to his children, grandchildren, and his legions of friends and admirers, employees and colleagues -- he is utterly irreplaceable.”

At the time Sheldon Adelson developed the Venetian, most casinos tried to get guests out of their rooms so they would gamble more. Adelson instead designed large suites at the hotel with business-friendly amenities such as fax machines, specifically catering to conventioneers.

“They always derided, they always demonized our convention strategy,” he said, according to a 2008 New Yorker profile. “And look who is laughing last.”

Entering Macau was Adelson’s most successful wager. Following the 1999 handover of the former colony to China, Adelson won the rights to build the Sands Macao, the city’s first Las Vegas-style casino. After the 2004 opening, he recouped his construction cost in a matter of months. He wound up with five casinos there.

Later, Adelson used his wealth to become a conservative force in U.S. politics and staunch advocate of Israel.

As a counter to political giving by fellow billionaire George Soros, he funneled almost US$30 million to favored candidates in the 2008 U.S. elections and spent US$100 million backing Republican hopefuls during the 2012 presidential campaign, including nominee Mitt Romney.

Adelson stayed out of the contentious 2016 Republican primaries but spent US$20 million late in the race backing the campaign of Donald Trump. Overall, Adelson and his wife contributed US$218 million to Republican candidates and groups in 2020, including more than US$90 million to groups backing Trump, according to the Center for Responsive Politics, making them the largest individual political donors in the country.

When the Trump administration announced that it supported relocating the U.S. embassy in Israel to Jerusalem, a proposal vehemently opposed by Palestinians, Adelson offered to personally underwrite the cost of the move.

“He was an incredible champion of the Jewish people, the Jewish state and the alliance between Israel and America,” Israel’s Prime Minister Benjamin Netanyahu said Tuesday. “He contributed endlessly to the Jewish state, funding breakthroughs in medicine and science and advancing higher education. He gave anonymously to help victims of terror and countless other people in need.”

Once a Democrat, Adelson became a Republican even though he claimed he was liberal on some social issues. In 2012, he wrote a Wall Street Journal opinion piece titled “I Didn’t Leave the Democrats. They Left Me.” His split came from disagreements over foreign policy such as the level of U.S. support for Israel, the cost of government welfare programs and corporate tax policies.

An opponent of an independent Palestine, he helped finance Israeli and Jewish causes. Adelson started Israel HaYom, a Hebrew language conservative daily that became the country’s largest newspaper by circulation. He later bought two other newspapers. He also campaigned heavily against online betting, on moral grounds.

Sheldon Gary Adelson was born on Aug. 4, 1933, in the Dorchester neighborhood of Boston, where he started life in a one-room tenement. His Lithuanian-born father drove a cab, and his mother, who came from Ukraine, managed a knitting shop.

“This could be a rags-to-riches story, but my family was too poor to own rags,” he said in a 2000 interview with Businessweek magazine.

He sold newspapers on Boston street corners at age 12, dropped out of school and became a court reporter for the U.S. Army.

In his early days as an entrepreneur, he made a living with candy vending machines and selling toiletry kits to motels.

Much of his philanthropy involved the Adelson Family Foundation, whose primary purpose “is to strengthen the State of Israel and the Jewish people,” according to its website.

In 2015 Adelson purchased his hometown newspaper, the Las Vegas Review-Journal, for US$140 million, a move made in secret that prompted the exodus of editorial staff worried about conflicts of interest covering one of the city’s most prominent businessmen.

Adelson and his first wife, Sandra, divorced in 1988, after adopting three children: Mitchell, Gary and Shelley. Mitchell Adelson died in 2005.

Miriam Adelson, a physician specializing in drug rehabilitation, had two sons, Adam and Matan, with Adelson. She also had two daughters from a previous marriage. Sheldon, Miriam and trusts for their children held almost 57 per cent of the company’s shares, according to a 2020 filing.

His longtime No. 2, President Rob Goldstein, who’s been with the company since 1995, signed a new contract in 2020 that runs until 2024. He took on the role of acting chief executive officer in Adelson’s absence. Miriam’s son-in-law, Patrick Dumont, is chief financial officer, and is expected to play a leading role at the company in the future.

A funeral will be held in Israel, where Miriam Adelson was born, Las Vegas Sands said.