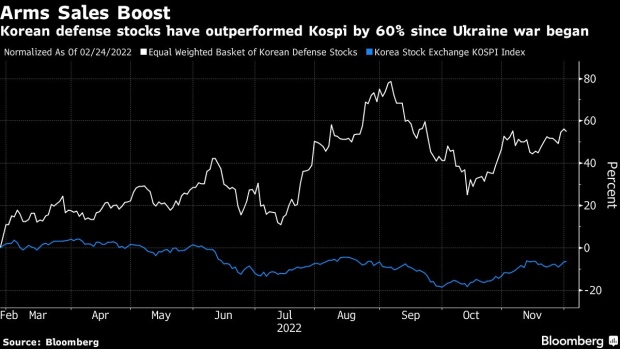 (Bloomberg) -- Russia’s war in Ukraine has opened a door for South Korea’s defense exports, which are on track to more than double this year as buyers seek to replace Soviet-era weaponry with higher tech arms from the Asian country.

South Korea’s defense exports totaled about $17 billion as of November this year, up from $7.25 billion a year before. Major buyers include countries that have for decades relied on stockpiles of aging Russian weaponry, like Poland, but have seen that many of those systems are no match for the weapons that arm the US and its allies.

South Korea has found itself uniquely positioned in the global arms market with weapons that are relatively affordable and meant to defeat Soviet-based conventional systems used by its neighbor North Korea. Meanwhile, Washington seems to be giving the green light to ally Seoul to sell to states in places like eastern Europe as US defense contractors race to fill orders for weapons that will go to Kyiv and Taipei, which is staring down threats from China.

Poland, which borders Ukraine, has been the biggest customer for South Korean arms since the war started. On Tuesday, the first shipment arrived in the Baltic port of Gdynia of 10 K2 tanks and 24 self-propelled K9 howitzers that were part of a $5.76 billion agreement reached in August with Hyundai Rotem Co. and Hanwha Defense Systems Corp.

“We want peace and therefore we do prepare for war,” Defense Minister Mariusz Blaszczak told reporters, adding that the country is providing “our army with modern equipment in order to guarantee safety for Poland.”

“Many people were saying that these are merely plans that might be executed one day, but today we have proved that we are realizing them and are strengthening our army,” he said.

Lee Boo-hwan, head of Hanwha Aerospace’s European business, called the handover a key milestone in the relationship between the company and Poland.

South Korea is now ranked as the world’s eighth largest weapons exporter, according to a report from the Stockholm International Peace Research Institute, or SIPRI. President Yoon Suk Yeol said he is aiming to take the country to number four by 2027, seeing the defense industry as a growth engine amid trailing exports elsewhere and a chip slump.

“In the midst of intensifying competition for technological supremacy, it is crucial to secure technological competitiveness to develop game-changing weapons system for future warfare,” Yoon said in a defense exports strategy meeting last month, wearing a pair of aviator sunglasses given to him by US President Joe Biden when he visited Seoul in May.

While some South Korean systems may not be as technically advanced as some weapons from the US, they are designed to allow its military of about 600,000 defeat a North Korean force that has more than twice the number of personnel and relies on more rudimentary conventional arms.

Items such as jet fighters, tanks, multiple rocket launchers and precision-guided artillery have been sold to the likes of Poland, the UAE, Egypt and Indonesia.

“South Korean weapons are generally well-received by the global market for their cost-effectiveness and quick delivery, as well as a comprehensive operations and after-service management,” said Moon Seong-mook, a former general in South Korea’s military who is now the head of the Seoul-based Korea Research Institute for National Strategy.

Defense stocks of companies such as Hanwha Aerospace Co., Korea Aerospace Industries Ltd. and LIG Nex1 Co. have skyrocketed since the war began in Ukraine in February, outpacing gains in the South Korea’s benchmark Kospi index by 60%.

One of the most recent acquisitions from Poland has come from a $3.55 billion deal signed in November to supply it with Hanwha Defense Systems Corp.’s multiple-launch rocket systems Chunmoo, according to the Defense Acquisition Program Administration statement.

The agreements are on top of a $3 billion deal signed in September for 48 FA-50 aircraft that will help wean Poland off of Russian MiG fighters. Specialist defense publication Janes said the South Korean fighters offer “a highly capable ‘light’ combat capability at a time when it is needed urgently,” and will augment advanced Western aircraft already in the pipeline.

In 2020, before Russia’s invasion, Poland struck a more costly deal to buy 32 F-35A fighter jets from the US, with the contract worth $4.6 billion, its defense minister said.

Despite bitter partisan politics in Seoul, boosting defense exports has been a policy pursued by former President Moon Jae-in’s progressive government and Yoon’s conservative party that took power in May. Just before he left office, Moon landed a $3.5 billion deal with the United Arab Emirates to sell it Cheongung II surface-to-air missiles.

Yoon is also pushing ahead with the fighter jet KF-21, also known as the Boramae, which is being marketed as a cheaper alternative to Lockheed Martin Corp.’s F-35 Lightning II. The design for the plane was unveiled under Moon and the $6.7 billion project to jointly develop the plane with Indonesia in 2014 was launched under his predecessor, President Park Geun-hye, a conservative.

Russia, meanwhile, may be turning to North Korea for help with its weapons. The Biden administration has accused North Korea of covertly supplying Russia with artillery shells for use in the invasion of Ukraine. The shells would be for older artillery systems that the two countries have operated since the Soviet era.

North Korea has denied the allegations and the US hasn’t released any evidence that such sales have taken place.

(Updates with statement from company.)