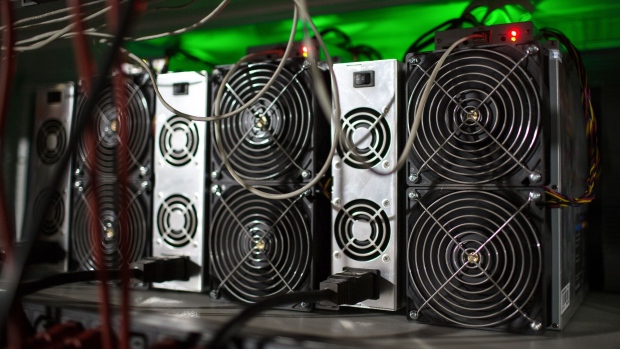 Application-specific integrated circuit (ASIC) devices and power units operate inside a rack at the BitRiver Rus LLC cryptocurrency mining farm in Bratsk, Russia, on Friday, Nov. 8, 2019. Bitriver, the largest data center in the former Soviet Union, was opened just a year ago, but has already won clients from all over the world, including the U.S., Japan and China. Most of them mine bitcoins. Photographer: Andrey Rudakov/Bloomberg , Bloomberg

(Bloomberg) -- New York State delayed a decision on whether to allow operations to continue at a power plant used for Bitcoin mining.

The Department of Environmental Conservation’s decision or next action on the plant operated by Greenidge Generation Holdings Inc. will now come by March 31, two months later than originally targeted. The delay will “enable DEC to complete its ongoing review of the approximately 4,000 public comments” on the matter, a spokesperson said.

Environmental activists and the cryptocurrency industry have been closely watching Greenidge’s application for signs on whether New York will allow Bitcoin mining operations at dozens of dormant power plants across the state. Climate advocates have condemned that process for sucking up as much electricity as entire countries, while advocates say mines often run on clean power and can encourage the development of more green energy sources.

Last year, Greenidge applied to renew its permits for the plant in the town of Dresden, the first time it’s come up for renewal since it has been powering a Bitcoin mine.

U.S. Senator Elizabeth Warren wrote a letter to Greenidge in December that pressed the company about the impact of its operations on climate change, the local environment and power prices. Greenidge, which is controlled by private equity firm Atlas Holdings LLC, said its operations are carbon-neutral.

Bitcoin miners are made up of thousands of computers that run complex calculations to maintain the cryptocurrency’s network, with successful miners rewarded in the valuable virtual currency.