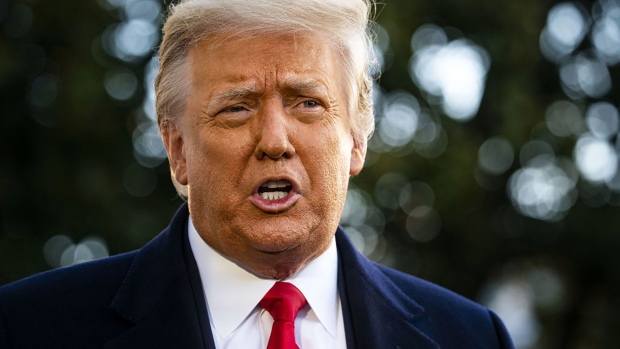 U.S. President Donald Trump speaks to members of the media before boarding Marine One on the South Lawn of the White House in Washington, D.C., U.S., on Wednesday, Jan. 20, 2021. Trump departs Washington with Americans more politically divided and more likely to be out of work than when he arrived, while awaiting trial for his second impeachment - an ignominious end to one of the most turbulent presidencies in American history. , Photographer: Bloomberg/Bloomberg

The justices without comment Monday turned away appeals that challenged the results in Georgia, Arizona, Pennsylvania, Michigan and Wisconsin. The cases included two filed by Trump himself and others pressed by his Republican allies.

The high court signaled months ago it wasn’t interested in hearing the appeals, which claimed without foundation that Biden’s wins were the product of widespread fraud, caused in part by the use of mail-in ballots. The court previously refused to issue emergency orders in the cases or put them on a fast track.

The justices also refused to take up a narrower case from the 2020 election centering on Pennsylvania mail ballots. Republicans said the Pennsylvania Supreme Court usurped its authority by ordering a three-day extension of the Election Day deadline for ballots to arrive because of the pandemic and expected mail delays.

State officials said fewer than 10,000 ballots were received during the three-day period after Election Day, a small fraction of the number Trump would have needed to overturn Biden’s 80,555-vote win in the state.